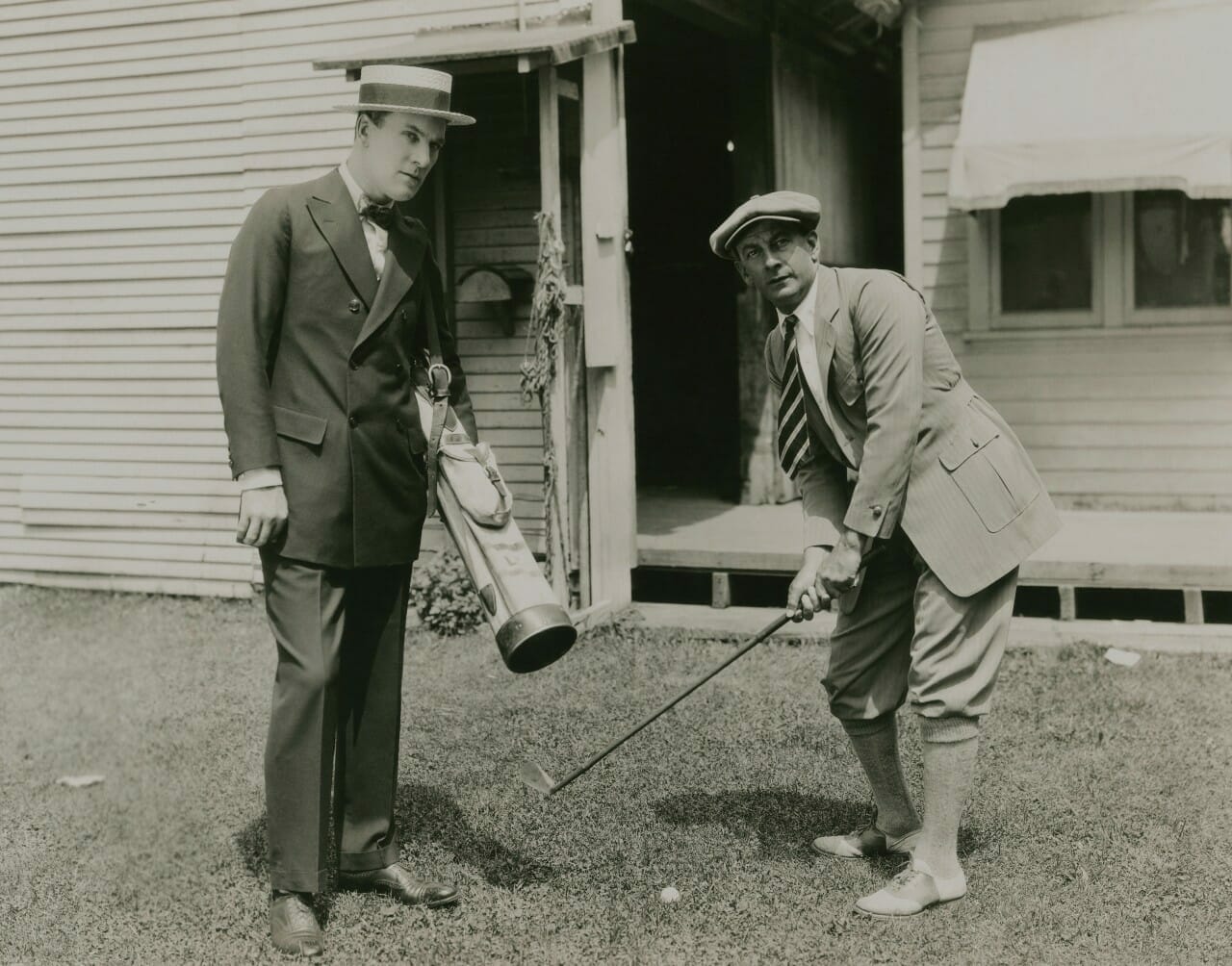 If you’re trying to get into golf and want to look the part, you need to know “what is a golf hat called”? You probably have the polo, the khaki’s and even the right golf shoes, but what you might want to complete the look is a golf hat.

But, what is a golf hat called? A classic golf hat has gone by a few different names. You may see it listed as a Newsboy Cap, Ivy Cap, or Flat Cap.

Keep reading to learn more about these hats, how they came to be the most classic golf hats, and other hats that are very popular on courses as well.

The Flat Cap (or Newsboy cap or Ivy Cap) has a stiff short  brim on the front and is typically made out of tweed, cotton, or leather. They were initially called flat caps due to their flat brim.

They hats have been around, primarily in British society, since the fourteenth century. They were made popular by golfers like Harry Vardon and Old Tom Morris, and they were also associated with the working class, oftentimes seen on factory workers and laborers.

Flat caps were inexpensive in comparison to other popular hats at the time like top hats and bowlers, so typically people could afford to own more than one.

Due to their size, portability, and soft fabric they became a very common hat for a college professional or fraternity brother who would own a few of these. This is where the alternative name, Ivy Cap, came about for this golf hat.

When these young men weren’t working they would wear their informal, Ivy Cap, on the weekend to pursue leisure activity, which often included a round of golf.

If you aren’t into the classic old fashioned look of the Flat/Ivy cap, you might be more inclined to don a bucket hat on the course.

Bucket hats are commonly worn for extra protection from the elements.

Many large golf brands carry various bucket hats, as well as other athletic brands that aren’t necessarily targeted to golfers.

While this type of hat used to be mainly for the older players, due to the diverse range of brands and colors available, many of the younger players on the course are seen sporting these hats.

Joel Dahmen, for example, is rarely seen playing without a bucket hat.

Despite their popularity, there is quite a debate in the golf community over whether or not bucket hats are appropriate golf attire.

Some say that since the elderly commonly wore bucket hats, they set the rules that they are appropriate. Others believe that due to the sheer sun protection alone they are acceptable.

Either way beware that if you wear a bucket hat to the golf course, you may be opening yourself up to having a debate about them as well!

Another hat that is often seen on the golf course is the Bonnie hat.

These hats originally were camouflaged and can be traced back to the military.

They have a workable wide brim that looks like a more flimsy bucket hat, and allows for easy storage in your golf bag.

They are often made with drawstrings to ensure the perfect fit, and their wide brim allows for optimal sun and weather protection as well.

Another type of hat that is commonly seen on the course in cooler climates, is the golf beanie. This is a head-hugging type of head-wear that covers parts of your head, forehead, and neck.

They can be folded up if you are getting overheated, and folded down to cover your ears if the weather is particularly chilly.

Many beanies are also even made with insulating fabrics, which allows you to trap some of your body heat in to better control your temperature.

Another classic look on the golf course is the fedora. The fedora has a small brim and the top of the hat can be creased into different shapes such as, diamonds, center dents, side dents, and teardrops.

Although they are not as common to wear to golf today, they were once a very common every day hat for individuals in the working class. If you are wanting to recreate a classic vintage look, but not wanting to wear a flat cap, this could be the perfect route for you.

Baseball caps are currently the most popular type of hat worn by golfers of all skill levels. Whether you’re a professional golfer or a recreational golfer, most likely you’ll be sporting a baseball cap.

Most golfers pick out their hats based on weather, style, and comfort. These hats are practical because they do shade the head and face from the sun, and also allow for the golfers to keep a better eye on the ball. Professionals often utilize these baseball caps to display their sponsor names on the front, back, and sides of the hat.

Of course, hats are not required to play golf. Historically, some major golfers like Arnold Palmer and Jack Nicklaus, didn’t wear hats at all while they played. But, given the sun protection and extra visual support, they have become very common on the everyday course. The added bonus of having room to display some sponsorship as well has made it very common for pro golfers to consistently wear hats as well.

Conclusion: What is a Golf Hat Called?

There have been many iterations of golf hats over the years. Here are the most common types of golf hat:

So there you have it, if you want to look the part on the course, you may want to add a hat.

Whether you go classic with the Ivy cap, blend in with the others with a baseball cap, or go sun-safe with the bucket hat is completely up to you!