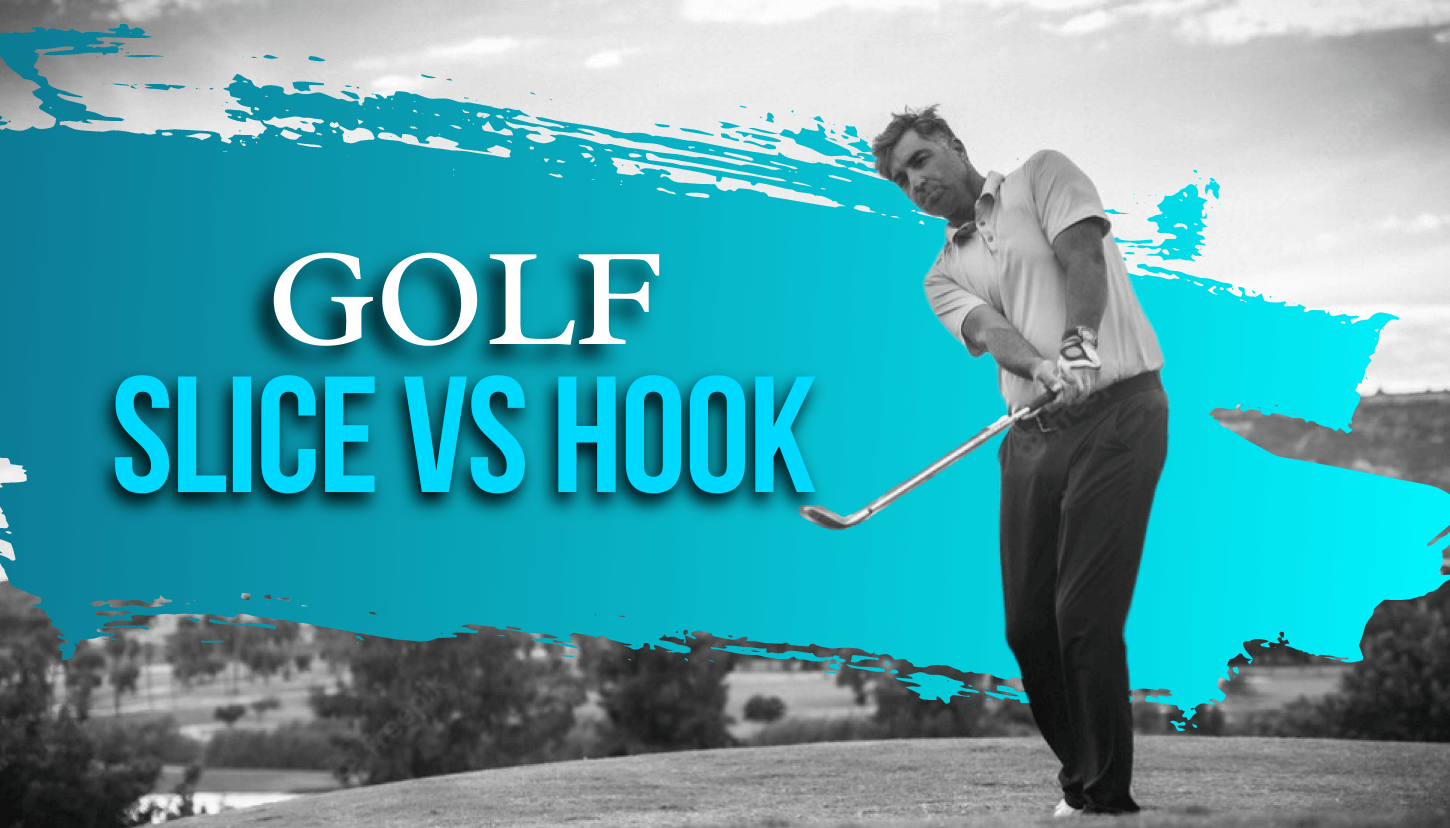 While hitting a straight, clean shot is every golfer’s goal, our movements don’t always go according to plan. Though in some cases, the curvature might be soft enough for you to still get a great shot, in others, you’re not as lucky…watching the ball violently curve either to the left or the right. If you’ve ever found yourself in this position, know that you’ve witnessed a slice or a hook.

To learn more about golf slices and hooks, including their similarities, differences, and, more importantly, how to fix them, read on until the end of this article.

Keep in mind: I’ve explained these two concepts from the lens of a right-handed player. If you’re a left-handed golfer, swap “left” and “right” while reading through the following sections.

The Similarities Between a Slice and a Hook

Though their orientations differ, a slice and a hook are two extremely similar golf shots. Both come with extreme, usually unwanted curvatures. That’s why, as a golfer, it’s essential to take steps to stay away from these types of shots as you advance your skills.

However, the operative word in the paragraph above is “usually,” as you’ll still want to be able to complete a slice or hook whenever necessary (for example, if you want the ball to get around an obstacle like a tree).

With that said, these instances aren’t very common, especially if you’re a beginner, so it’s best to first learn how to hit the straightest shots possible and then attempt to strategically use slices and hooks if needed.

Another similarity between these shots is the fact that their drastic trajectory stems from issues with club orientation at impact, which is what you’ll want to work at when trying to shoot straighter, as I’ll also discuss below.

With that out of the way, let’s get into the differences between a slice and a hook.

The Differences Between a Slice and a Hook in Golf

As I’ve already explained in the previous section, the main difference between a slice and a hook is the orientation of the trajectory. When a right-handed golfer is playing, a slice refers to a ball that curves drastically from left to right, while a hook makes the ball travel in the opposite direction, from the player’s right to their left.

The opposite is true for left-handed players. Their slices travel from right to left, and their hooks from left to right.

If you’ve already played some golf or done some research on the sport, you probably have already drawn parallels between the descriptions above and two other commonly used shots: the draw and the fade.

These are also curved shots that draw a trajectory that tilts either to the right or the left. However, draws and fades are far more common and less problematic than hooks and slices since their curvature is notably less dramatic.

With that said, the first step to hitting cleaner, straighter shots is to learn how to spot a slice or hook the minute you see it. The following sections might help you achieve just that.

I’ve already explained the definition of a slice and its orientation, so I’m not going to bore you by repeating myself. However, I’ll try and explain how you can notice a slice when you see it and how to refrain from hitting such a shot when you don’t want to.

Unlike a fade, which, if you’ve ever played golf, you’re already familiar with, a slice is not desirable (at least most of the time). That’s because curving the ball too far right (or, if you’re a left-handed player, left) can quickly make it challenging for you to remain in the game. Due to the drastic trajectory, it follows, the ball in a slice loses some much-needed distance.

However, the lost distance is the least of your problems here. While a fade, as mentioned, is still controlled and intentional, you never know where a slice your land, which leaves you open to risks you don’t want to take in a challenging, head-to-head game.

So, what can cause a slice?

A slice is created when you hit with an open face (relative to your swing orientation). When you start your shot to your far right, you can feel a slice coming. From that point on, no matter how you move the clubface, a notable curvature is guaranteed.

If you see a slice coming right as you start moving the club, the best thing you can do is to promptly start moving it in a straight line. If you continue a path that goes from left to right, you won’t only be slicing the ball but pushing it as well, which only exacerbates the issue.

If you do find yourself struggling with your slices, don’t worry. You’ll find that these types of shots are the most common among beginner golfers, and it takes a lot of time and patience to get to those ruler-straight shots you’re after.

You already know that a hook is that unfateful shot that sends your ball flying off to the left. Luckily, knowing what causes such a sharp trajectory, you might be better able to avoid this type of shot moving forward.

A hook occurs when you hit the ball with a closed clubface.

While the slice is a shot most common among beginner and intermediate players, you might find experienced players hitting a hook every once in a while. That’s because a hook is created by two different motions.

Beginners tend to hit a hook when they swing from the outside in, which is a mistake you’ll never find pros doing. The latter, however, can still pull their shots right at the moment when their swing slightly shifts from the left to right, leading to a hook shot.

How To Fix a Slice or Hook

Since by now it’s clear that slices and hooks are usually undesired shots, you might be wondering what you can do to fix them and hit cleaner and straighter moving forward. Here are some of my top tips:

However, they can prove invaluable if you find yourself in a position where you must deflect an obstacle. Therefore, while learning how to shoot straighter is essential to improving your skillset, knowing when to strategically hit a slice or hook can help you achieve some of the most impressive shots of your experience as a player.