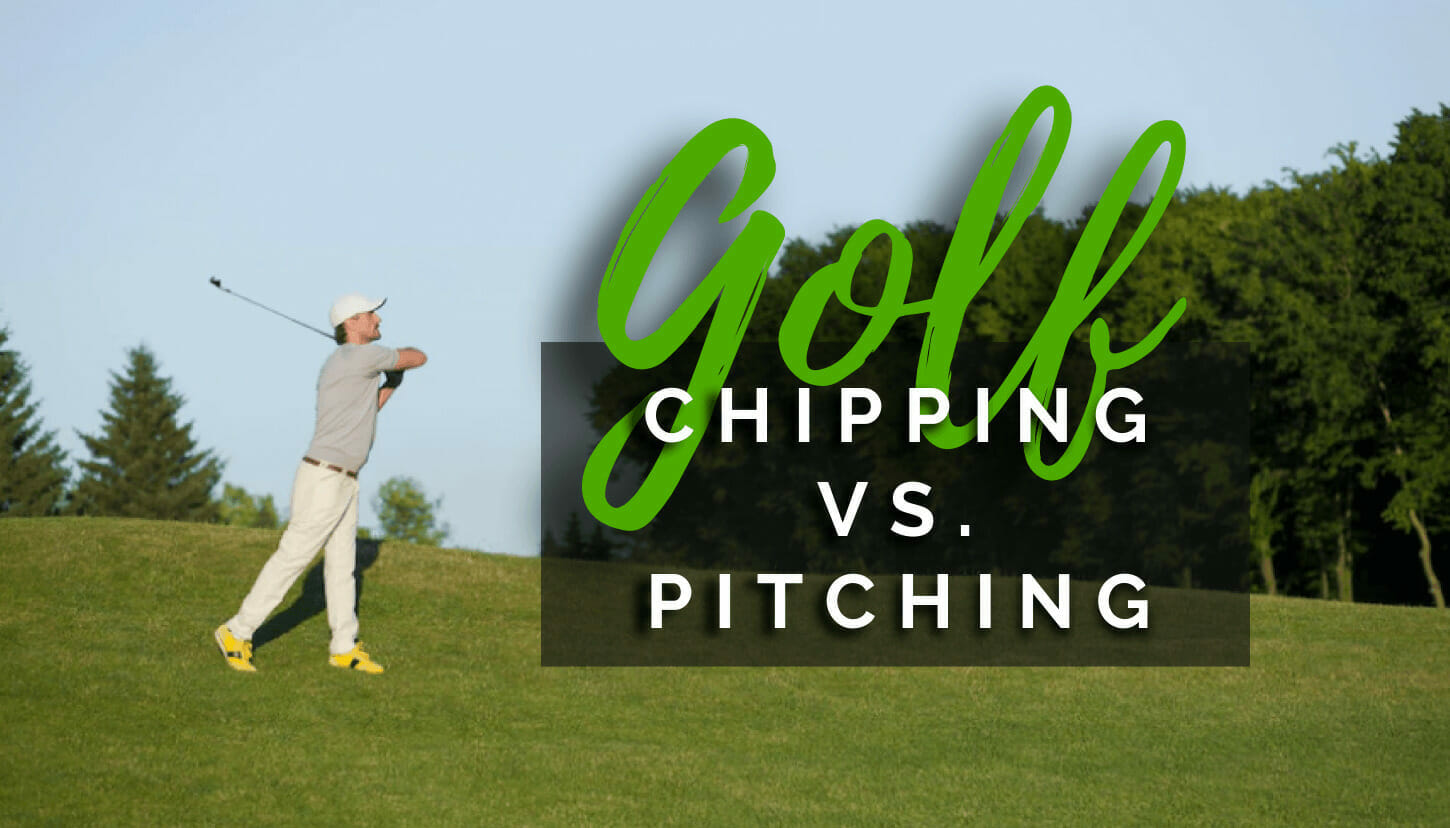 If you’re new to golf, you may be overwhelmed by a litany of new terms. After all, who would have thought a sport that’s so quiet and relaxing would have so much terminology? Two confusing golf terms are chipping and pitching.

Golf chipping and pitching both involve hitting the ball from a relatively short distance. However, the techniques differ. The main difference between a golf chip and pitch is that a chip impacts the ball with more spin and less air, while a pitch extends the backswing to give the ball more air. Both are used when you’re approaching your target.

Below, I’ll go into greater detail about the differences between these two swings. I’ll also give you some info on when to do each swing and how to do them. Then, I’ll wrap up with an index of common golf swing terminology you should keep in mind.

Are Golf Chipping and Pitching the Same?

There are some distinct similarities between chipping and pitching. Both need to be in your short-game arsenal and are in the same realm of strategy. They are “get-it-to-the-green” shots”–but technically, all shots are.

However, chipping and pitching aren’t the same, though a less experienced golfer might use the terms interchangeably. They can be used when there’s a short distance to your next hole, but the way you go about them is vastly different.

Golf chipping is a low-trajectory shot typically used to move the ball a short distance from the green to the hole. It involves a shorter backswing and follow-through than a traditional golf swing, and the ball is typically hit with a lofted club, such as a wedge. This almost looks like a putt but has a more considerable spin.

On the other hand, golf pitching is used to hit the ball a much further distance than chipping, usually from the fairway to the green. However, you should still use it as a shorter-distance shot. It’s typically hit with an iron club and also involves a longer backswing and a longer follow-through than chipping.

As Mickelson mentions in the video, a pitch is just an extension of a chipshot. If you can’t remember the difference, think deeply about the two words.

You’re just taking a piece off something when you chip something. When you pitch something, or a baseball player throws a pitch, you’re extending a longer, more powerful throw.

What Is Golf Chipping?

Golf chipping is a helpful shot to practice to have in your golfing arsenal, as it can help you move the ball accurately and efficiently over short distances.

Most chips are done when you’re already on the green but still have a bit of distance between you and the cup. Chipping is a way to control the speed and rolling of your ball to get it to go as far as possible onto the green.

Anyone can perform a chip shot, and it doesn’t take too much skill. Chipping is easy to practice, and you may already be chipping at the ball without knowing it. Again, most golfers use a wedge club to get this done.

When To Use a Chipping Swing

There are a few reasons someone might decide to pull out the old chip swing. When you do your chipping swing, you’re usually only ten or twenty yards from the green. If you have a chipping club, you’ll use it now.

It’s best to use a chipping swing when you’re close to the green but too far away to putt. The goal of chipping is to get the ball close to the hole so it can be put into the cup. This isn’t a great shot for obstructions or getting out of the sand because it really doesn’t involve much power.

What Is Golf Pitching?

A pitching swing is an important shot to have in your golfing toolkit as well, and this one will take some practice. You’ll know you’ve seen a pitch shot when the ball gets a lot of air at a short distance.

Golfers typically use pitching for distances of around 40 to 50 yards (37 to 46 meters). However, it’s unnecessary to put a cap on when to use it because it’s a rather versatile shot.

Pitching involves a little more skill than chipping because it requires a lot of control on your end. You need to hit the ball with the right speed and air, controlling the spin, so it doesn’t go too far. It’s a more controlled and more intentional drive.

When To Use a Pitching Swing

Golf pitching hits the ball farther than chipping, usually from the fairway to the green. It involves a longer backswing and a longer follow-through than chipping. It is typically hit with an iron club or a pitching wedge if you have one.

Depending on how far back you are and what your swing looks like, the pitching wedge might be good for you.

As for when to pull it out, there are a few scenarios where a pitch will make the most sense:

Types of Swings in Golfing

Let’s take a look at the most common ones:

Golf is a complex and varied game, and being able to master different golf swings and shots is essential for success. From the drive to the flop shot, many different types of swings/shots can be used for different situations on the course. Knowing the basics of each type of swing and shot and when to use them can help you to become a better golfer. With practice and dedication, you can become a master of the golf course!

Chipping and pitching are similar because they work for short distances and can support you in rough terrain.

When you think of golf chipping, think about a short shot requiring you to take a chip off the ball. Your pitch will be an extension of this, which will help you with longer distances and give your ball a little air.