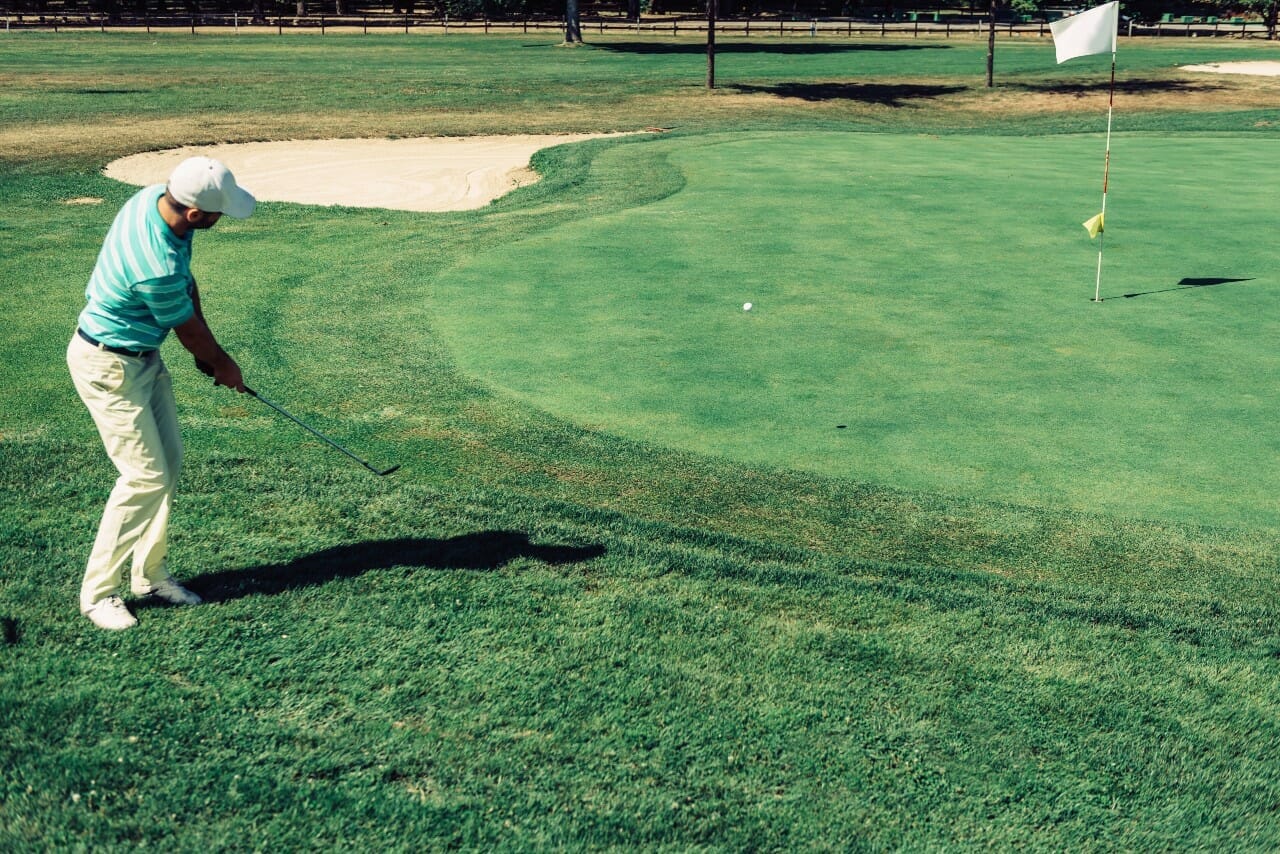 There are a lot of different terms for golf shots. If you have ever heard the term “chip shot,” then you might be scratching your head. What is a chip in golf, and how can it benefit your golf game?

So, what is a chip in golf terms? A chip shot is essentially a shot that keeps the ball low to the ground. It is a good shot for when you need to get the ball closer to or in the hole but don’t need it to go airborne. It is similar to a putt in the way it stays low. Chip shots are hit with various clubs, but a pitching wedge, 9-iron, or 8-iron with proper stance is key.

If you’re new to the realm of golfing and curious about chip shots, you’ve come to the right article. Here, you will learn everything you need to know about chip shots, such as what a chip shot is, the best iron to use, and how to properly hit one – plus so much more.

What is a Chip in Golf?

A chip shot is similar to a putt. The goal is not to go airborne or reach far distances. Instead, it is utilized to get the ball a little closer to or inside the hole without coming up off of the ground.

These low hitters are ideal only in certain situations, such as trying to establish a better stance on the green is hitting the hole.

How to Hit a Chip Shot

1. Use the Right Club

Various clubs can be used to hit chip shots. However, many beginners will make the mistake of using a lob or sand wedge. These types of clubs are more challenging to use and won’t work well for a chip shot.

The best option for a chip shot is a pitching wedge, 9-iron, or 8-iron. Using these clubs will ensure you have better control and easier maneuvering the ball around the green with a perfect chip shot.

2. Use the Right Stance

Your stance is just as important as the club you’re using, if not more so. When performing a chip shot, you want to get a bit closer to the ball. The majority of your weight (70%) should be focused on your lead foot (which could be right or left). The goal is to strike the ball rather than the ground behind the ball.

The ball should be located at the back of the center of the sternum. This is because the ball doesn’t need to go excessively far, so having a somewhat forward lean will ensure the ball is hit properly.

4. Choke Down on the Club

When utilizing a chip shot, it is perfectly fine to choke down on the club. That’s because you need to have ultimate control when shooting a chip shot. Remember – the goal is only to move the ball closer to the hole. There is no need for the ball to go airborne or super long distances. Choking down on the club will give you the precision necessary for low and short chip shots.

5. Know Where to Hit the Chip Shot

Just like any other type of shot, you need to know where you want your ball to land so you can essentially guide it. With a chip shot, you want to be about 20% to the hole. If you shoot it properly, chip shots will typically roll into the hole, or at least get close to it.

When to Use a Chip Shot

A chip shot has its purpose, but it’s not always the way to go. So how can you know when it’s time to use a chip shot? There are a few key things to determine before deciding on a chip shot.

What is the difference between a chip and a pitch?

How far are chip shots in golf?

Chip shots do not go far in golf and are meant not to carry the ball. That said, most chip shots will hop about three feet from the fringe. From there, the ball will likely roll into the hole or near it.

What is the rule of 12 in golf chipping?

Rule of 12 in golf chipping is a technique that determines the relationship between the loft and the amount of roll – 12 yards are used as the desired distance for the ball to be carried by the chip shot.

Conclusion: What is a Chip Shot in Golf Terms?

Golf chip shots are best used when shooting the ball onto the green and having it roll the rest of the way into the hole. Chip shots require a special stance and the correct club for the best results.