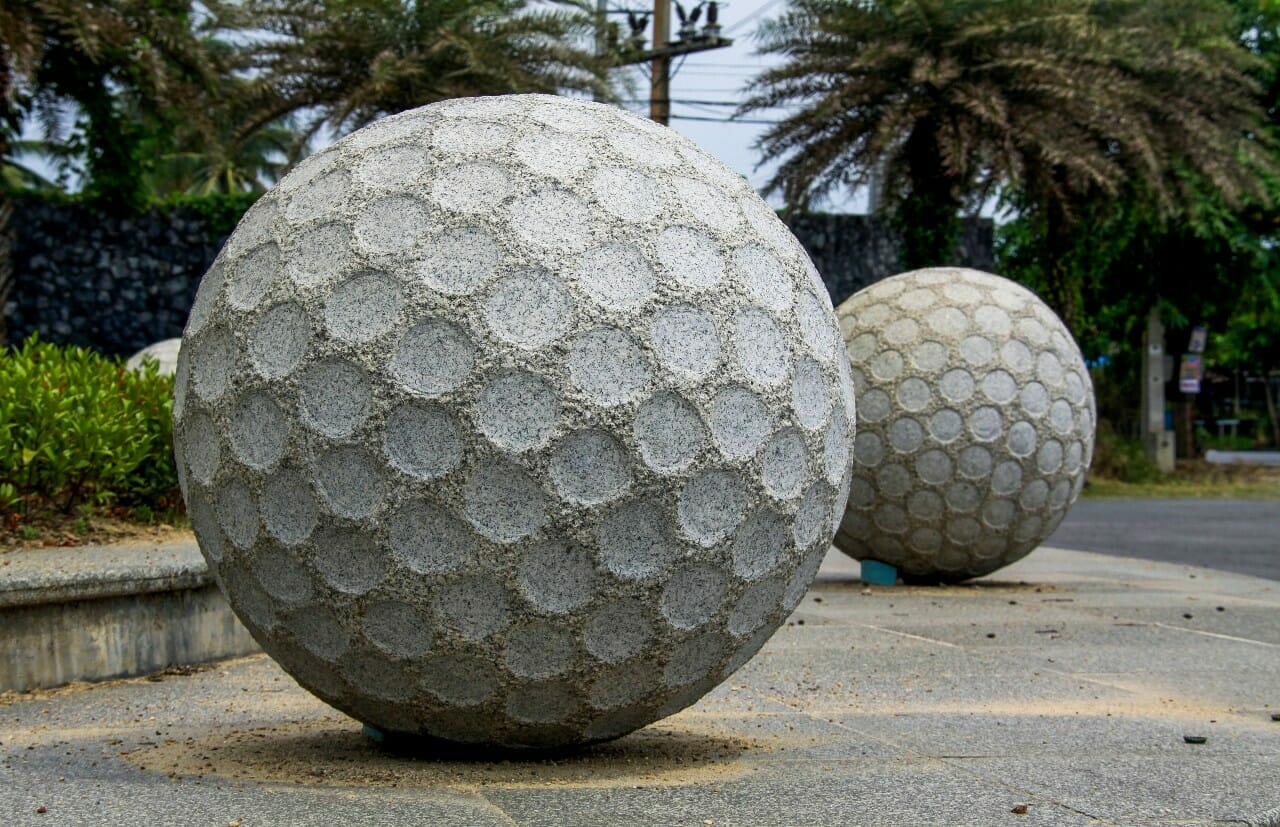 How much does a golf ball weigh? If you are a true golf nerd, you probably already know the answer. If you are a casual weekend golfer, you probably have no idea. While it may seem like a trivial question, the weight of a golf ball (including golf ball weight variations based on brand and model) can affect how far and accurately you can drive your ball. It might take a few more swings to figure out your optimum swing speed for a ball with a different weight, which might mean that a lighter ball may be better for your short game.

So, how much does a golf ball weigh? In order to compete in recognized tournaments, golf balls must weigh no more than 1.62 ounces or 45.93 grams. These regulations are set determined by the Rules of Golf created by USGA and R&A golf governing boards.

If you want to read more on the weight restrictions on golf balls as well as the history on golf balls, read on below.

Golf Ball Weight and the History of Golf Balls

Initially in the 14th century, hard wooden balls were used for golf. These balls were generally made from harder woods, such as beech and box trees.

Alongside these wooden golf balls around the 15th century were leather balls, both stuffed with cow hair or chicken and goose feathers. The leather balls made from cow’s hair were created and exported from the Netherlands.

The feather-filled balls, called featherie, were likely later created and became the standard ball for golf. While this might seem odd to make a golf ball out of feathers, as a heavier ball will go further, golf ball makers had a way around this.

Makers of featherie balls had to boil the feathers, in an amount similar to the volume of a top hat, in order to soften them to be stuffed into the small leather pouch.

Then the ball was sewn closed.

Although this process was tedious and, due to the labor required, the balls were expensive at around $10-20 USD at today’s rate, these were still the standard ball used into the 19th century.

Through the 1800s and 1900s there were several other innovations and breakthroughs in the evolution of the modern golf ball.

Different inventions included a ball made from the sap of the Malaysian sapodilla tree, a rubber ball with either a liquid or solid core and outer layer of balata tree sap, adding dimples to the ball for better aerodynamics, new outer synthetic resins to replace balata sap, and the replacement of caustic liquid cores with solid cores.

Weight Restrictions Of A Golf Ball

Golf balls in competitions will need to weigh no more than 45.93 grams or 1.62 ounces. Size and weight restrictions of golf balls are determined by the United States Golf Association, governing the US and Mexico, and the R&A, governing the rest of the world.

Both of these associations came together to create and eventually govern the Rules of Golf in 1952, making the size and weight regulations standard in all competitions.

Initially the rules were still not the same between R&A and USGA rules on the size and weight of the golf ball.

Not until 1990 did the two agree on the standard regulation size and weight for golf balls. Therefore between 1952 and 1990, competitors had to comply with the different golf ball rules depending on what association was presiding over the competition.

The heavier a golf ball is, the less it will be slowed while soaring through the air. Because the ball is not slowed down as much if it is heavier, it will travel farther than a lighter ball. A heavier ball will have an unfair advantage to that golfer.

Golf balls weighed and found to be heavier than the regulation weight of 4.593 grams or 1.62 ounces will be illegal.

Standardizing these rules allow for fairer game play as well as informed practicing. With a standard regulation used globally, competitors will ensure that they are using the correct weight of golf ball both when practicing and when competing.

While there is a maximum weight for a golf ball, there is no minimum weight. This is mostly due in part to the fact that having a lighter ball is detrimental to your golf game.

Lighter balls will not travel as far as their heavier siblings as they are being slowed down by the air. It does not behoove you to use a golf ball that is on the lighter end.

Manufacturers will of course do their best to produce golf balls whose weight is as close to the 45.93g or 1.62 oz mark as possible, but there will be a margin of error. This is why at competitions the golf balls will be weighed prior to the start of competition to ensure no competitor has a weight advantage.