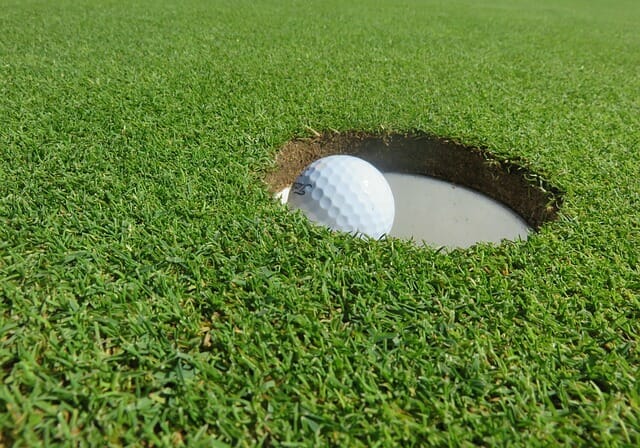 We all know that the Cleveland brand is synonymous with great wedge club design and manufacture. They have one of the most enviable reputations in the golf industry. Today we're excited to get our hands on the new addition to the Cleveland wedge collection. Below you will find our hands-on Cleveland CBX Wedge review.

If you're a mid to high handicapper we think that the CBX will MASSIVELY help your short game.

If you are considering purchasing this golf club, we have also included a list of PROS and CONS in our standard rating table below.

You'll also find our star rating for the club on Build Quality, Control and Performance and finally, Design and Appearance...

Check This Product On Amazon

We are going to be giving you some on course information - real time.

The Cleveland CBX Wedge Is Here,
And It Wants To Show You What It Can Do!

Today we're gonna be reviewing the CBX wedge from Cleveland Golf. We are going to be giving you some on course information - real time.

We're looking forward to this! I have a 50-degree 11 bounce CBX here to start so let's go.

There are four main factors that you NEED to know about:

1. The first one is the cavity back design the 'CBX' design. It pulls way off the face at a little lower down. It's going to match your game improvement irons and the forgiveness you're looking for by pulling the weight off and down a little bit...

2. The second thing is that the CBX wedge has these innovative Rotex grooves. It's the same milling that you see on every other wedge that Cleveland makes. You can't expect them to change that. They're not gonna change that at all. It's just how they do it...

3. The third thing we want to talk about is the Dual V sole, you can see the little ridge that Cleveland designers have put on this club. This is going to allow a lot of versatility so you can:

Close it, or, Lay it open, and you're still going to have the wedge workability that you've always been looking for...

4. And finally Gentlemen and Ladies they have this 'feel balance technology' built into the club (which we love). Basically, they've shortened the hosel to move the centre of gravity just a little bit more toward the middle of the face. And as a result of having that cavity back plus the centre of gravity in the middle of the face is going to 100% give you lots and lots of forgiveness.

Ps. Trust us on that.

Ok, so that's the physical part of the club done, now we want to get this baby out on the course and try it out.

So what are we waiting for?

Let's get this CBX out on the course...

How Does The Cleveland CBX Wedge Fair Out On The Course?

We can't wait to see how this club plays out in a real-world environment. Ok, right guys.

I'm 102 yards away from the pin, and I'm going to give the 50 degrees CBX a hit for the first time to see how it works it's magic.

Let's see how it feels off the fairway.

Looking down as I setup up to the ball the first thing I notice is that I really can't tell that this is a cavity back wedge.

As I look down at the club, I can see the welcoming classic satin Cleveland on the face as it opens up to the ball. I feel like the face is just that little bit bigger than I would expect from this sort of wedge typically, but the top line is beautiful.

I can't see or tell you anything about the sole because everything's hidden. I'll be honest the weight of the club feels great. It feels like just a smidgen lighter than when I expected, but that could be the shaft.

It's a 115 shaft as opposed to the wedge flex which is a little heavier which I use on my other wedges.

The moment we've been waiting for. Let's hit it and see how it goes off the face.

I'll be honest; it feels nice off the face. Exactly how I expected a Cleveland to feel. It's a nice shot. Nice flight. It's flown straight onto the dance floor (middle of the green). I've just pulled the shot a little bit to the left, and it feels as good as any Cleveland wedge out there.

To recap I like the way it looks down by the ball.

Let's head over to the green and take a look to see how the shot landed.

Ok, so my pitch mark is a light one (it's quite hard on the greens this morning). As I said I just pulled the shot a little, and I have a 25 footer on for the putt. I'm happy with that shot.

The Cleveland wedge felt tremendous so let's go try it in some bunkers.

Now I'm going to do a different couple of shots. Probably just a regular bunker shot and then I want to open the face out and try that out too. See how it feels.

Alright, so here I am in the fluffy sand. Really nice and fluffy. I'm in a great position (for in a bunker) to make a shot at the pin with the Cleveland CBX wedge.

I'm going to open up the blade a little more and see what I can do....

Ok, this felt great out of the sand. The shot was a little long, but all I can think of initially is how it moved in the sand. It was really nice. I caught it a little firmer than I wanted, but overall the club felt really good.

Now I'm going to open the blade up just a little bit to see how that looks. The club head does seem a little thinner, to be honest. Wow, that feels really great out of the sand with the open face. I can't really see any problems here. The wedge has such a nice buttery feel to it.

Overall, the Cleveland CBX wedge felt great hitting out of the sand.

I like to hit the high flop kind of shot up close to the green, and I was worried that the broader sole of on the CBX it would affect me pulling this kind of shot off. I didn't need to be concerned.

Because of the really innovative Dual-V sole grind, the heel of the sole is a lot thinner than the width of the toe.

That means that when the clubhead is sitting down on the ground, it looks charming on the eye next to the ball.

I'm going to try out the club some more on the next hole and see how it works out.

I'm just going to drop one right here. My rangefinder is telling me I'm 82 yards from the pin. Let's see if I can work a shot in here. At a distance of 82 yards looking down at the ball again, it seems reasonable, as with any Cleveland Club it looks like the club has a little bit of a higher toe, I mean not to the extent where it's off-putting - it just seems excellent, I like the look of the club a lot.

I could pretty much do whatever I wanted with it.

STRIKE 4. (Nice lie on the fairway)

Oh, let's go take a look. That was a fantastic shot. I caught it right out of the middle of the club bringing the centre of gravity into play - thanks to that field balancing technology. Let's go take a look and see where it ended up on the green!

I want to take a look at this because this is this is just amazing. The pitch mark for my 82 yards, 50-degree wedge shot is about 8 feet from where my ball ended up.

And I'm only left with a 3-foot putt. This is precisely why you invest in good quality clubs such as the Cleveland CBX wedge. They just work. The zip back on the pitch mark was about 8 feet like I say, it's just fantastic.

I'm so pleased with my hitting with this club. You would think with a cavity back wedge you wouldn't have as much spin.

But this club is different!

I may end up having to get me one of these clubs it's that good!

Anyway, let's go try it out one more time on the next hole. Right, we're gonna give the Cleveland CBX one more try, and this time we're going to do a little bit of a flop shot. I'm going to hit a couple of balls out here just to see how it goes and as I say we're going to be hitting some floppers out of the rough.

Strike 5 and 6. (Flop shot out of the thick rough / Flat shot on the fairway)

I have to say it got through the thick rough nicely. Excellent strike, good trajectory, I'm happy with that.

I want to try a flat shot from the fairway now. I'm very conscious I don't want to blade it, so we'll see how it goes.

Ok, I got under it too much.

Not the best shot, but that was definitely me and not the club!

Answer: The CBX wedge with a 50 degree loft is only available in 11 bounce.

2. Are the CBX wedges forged?

Answer: Actually these are cast clubs.

3. Is it possible to get the loft and lie adjusted in a custom fit shop?

The moment you've been eagerly waiting for.

Our conclusion on the Cleveland CBX wedge.

First off, it's a really versatile club, especially with the Dual V sole. It allows you to work the ball, you can open it up, but you can hit regular shots too.

You can close the face on punches.

The one thing that stays the same, regardless of the shot type is that it feels fantastic!

It feels as good as any Cleveland wedge I've ever hit. I have to say I also really like the cavity back the idea to give you even more forgiveness. It just works.

The field balancing technology whice moves the centre of gravity into the middle of the club means that overall - it's a fantastic wedge.

I would definitely say this:

It gives you forgiveness,

And most importantly, it does what you're hoping it does - it is COMPLETELY controllable from a yardage and trajectory point of view.

So that's it, guys, we think this wedge is actually as good as or better than your current wedge. Quite the statement.