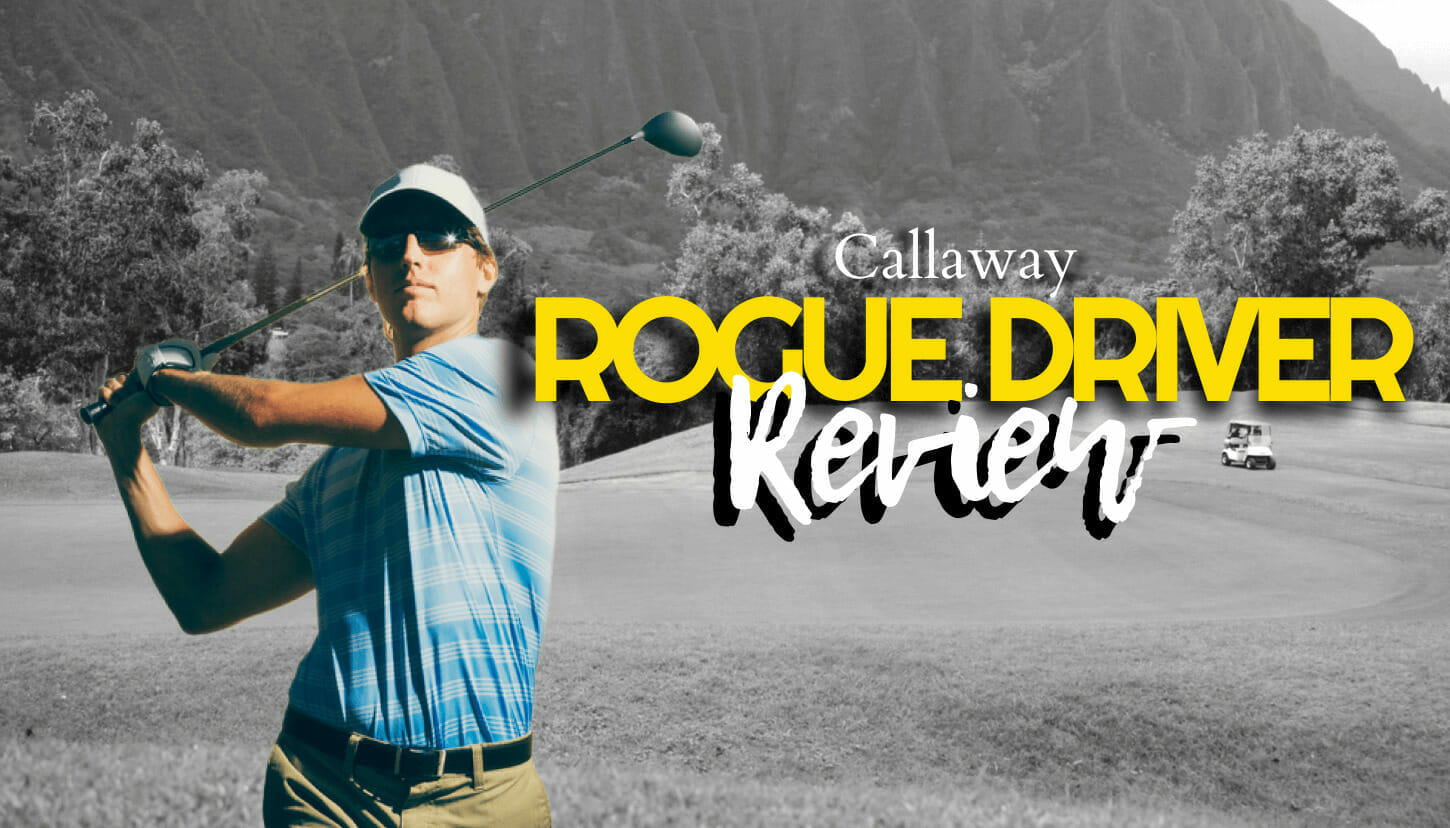 Callaway is well-known for producing some of the best golfing equipment in the world, and their drivers are no exception. From the Epic Speed to the Big Bertha, we always expect quality drivers from Callaway, and it’s no wonder that many golfers have taken an interest in the Rogue driver.

The Callaway Rogue driver’s most outstanding feature is its forgiveness, which is a direct effect of its improved jailbreaker technology. Besides being very forgiving, the Rogue driver has also increased ball speed and distance.

Keep reading the complete Callaway Rogue driver review to find out if this jailbreak tech lands it on our list of best golf drivers.

Pros of the Callaway Rogue Driver

Cons of the Callaway Rogue Driver

Technology plays a huge part in modern golf, and it is no different when it comes to golf drivers. Different manufacturers like Callaway have consistently released new drivers with different technologies over the years.

Here’s what you should know about the improved technology and features of the Callaway Rogue driver.

Jailbreak technology is a series of titanium bars that connect the crown and the driver’s sole. It allows for improved energy transfer between the club face and the golf ball, creating maximum speed at impact.

This lightweight club is ideal for both professionals and amateurs alike who are looking for greater accuracy in their swing.

Although Callaway’s previous drivers include triaxial carbon, the Rogue Driver’s crown is bigger and better than other preceding drivers.

The X-Face VFT saves some weight and distributes it strategically, especially across the off-center limits, to increase ball speed.

Together with the jailbreak technology, the X-Face VFT architecture of the Rogue Driver adds more flair. As a result, the Rogue driver produces faster ball speeds across a wide area of the face, allowing for greater control from even off-center shots.

This unique technology not only helps players get more distance but also provides better accuracy for those seeking consistency on their drives.

Callaway has always built and designed its metal woods with the speed step technology.

But they took it to another level with the Rogue Driver.

The Rogue Driver’s leading edge is an improvement on all preceding drivers. The improved metal wood gives the Boeing Aero Package an improved airflow and faster clubhead. This advanced aerodynamic design increases ball speed without sacrificing accuracy or forgiveness for mis-hits.

The Callaway Rogue driver has a look of greatness and confidence that will always catch your attention. It has a similar appearance to the epic driver but looks better. It has a gloss back and carbon fiber crown that looks exactly like that of the epic driver, although it’s a bit thinner.

One striking aspect of the design is the sole. The sole’s blue accent color is neither loud nor dull – it’s just perfect. However, the Rogue driver would have had a perfect appearance without the gloss finishes. They look fine, but they don’t hide smudges and marks.

The Callaway Rogue driver offers exceptional sound and feel. It combines distance, sound, and feel qualities that have never been seen before in the same driver.

In the past, if you wanted more distance or forgiveness from your driver, you had to sacrifice sound and feel quality. But with the new Rogue driver, golfers can now get both performance and quality all in one driver.

Regardless of the Rogue driver’s amazing distance and forgiveness, it still has a good sound and feel. When you hit the sweet spot, the sound and feel are so satisfying that you want to do it all over again. It’s solid and not loud at the same time.

However, one feature that needs improvement is the tactile feedback of the Rogue driver. It could be better. Apart from this, every other thing is good to go.

Every new piece of equipment from Callaway is an opportunity to improve features and fix problems with existing ones.

The Rogue driver doesn’t disappoint in this regard.

It was specifically engineered to give golfers a maximum advantage when it comes to the following:

Callaway Rogue drivers cover more distance than the popular Epic driver, making the Rogue driver one of the best choices for any golfer.

Regardless of your swing and the club’s configuration, the Rogue driver covers a longer distance. All you need to do is hit a good ball flight and be assured that your driver will carry it all the way.

Previous Callaway drivers are known for either driving long or being forgiving. But the Rogue driver is a hybrid: it’s a long-range and forgiving driver. This is expected, thanks to its advanced jailbreak technology, VFT, and triaxial carbon crown.

A combination of steady direction and speed is all most golfers need in a driver. Try the Rogue driver for yourself and see how most of your shots would stay in the fairway and your missed shots wouldn’t stray away that much. Callaway claims that the Rogue Driver performs better than the epic driver on mishits.

The lack of a sliding weight to change the CG doesn’t make the Rogue driver any less forgiving. The loft and lie settings are all you need to hit to hit better shots.

Callaway Rogue driver has three lofts and an “opti-fit” hosel, making it very easy to adjust the lie and the loft.

The Rogue Driver was less workable than the epic driver. But it has great playability, and you would enjoy every single hit.

Fair warning: mid-to-high handicappers might enjoy the Rogue Driver more than “high swingers” thanks to its light stock shaft. Generally, though, the driver makes ball flights straight and fairly high.

Is the Callaway Rogue Driver Worth it for Every Golfer?

The Rogue Driver is better suited for mid to high-handicap golfers who need straighter and longer drive than golfers who already have a high swing.

Naturally, fast/high swingers will have some issues using Rogue Drivers because it’s light and has a higher spin because of their MOI. However, fast swingers can still have fun with the Rogue Driver using the loft and lie settings.

If you are a high swinger, remember to tune the loft and lie settings for your swing while using the Rogue Driver. I would recommend using a 9° loft setting.

The Rogue Driver is for you if you’re a mid-to-high handicapper still missing shots and losing distance on the toe and heel connections.

With the jailbreak technology and X-faced VFT structure, this driver will increase your forgiveness and speed and have more straight hits.

The Rogue Driver is a strong contender of Callaway’s best drivers so far because it has something for every golfer.

The Rogue is not the cheapest driver, but its speed, distance, and high forgiveness make the price worth it.