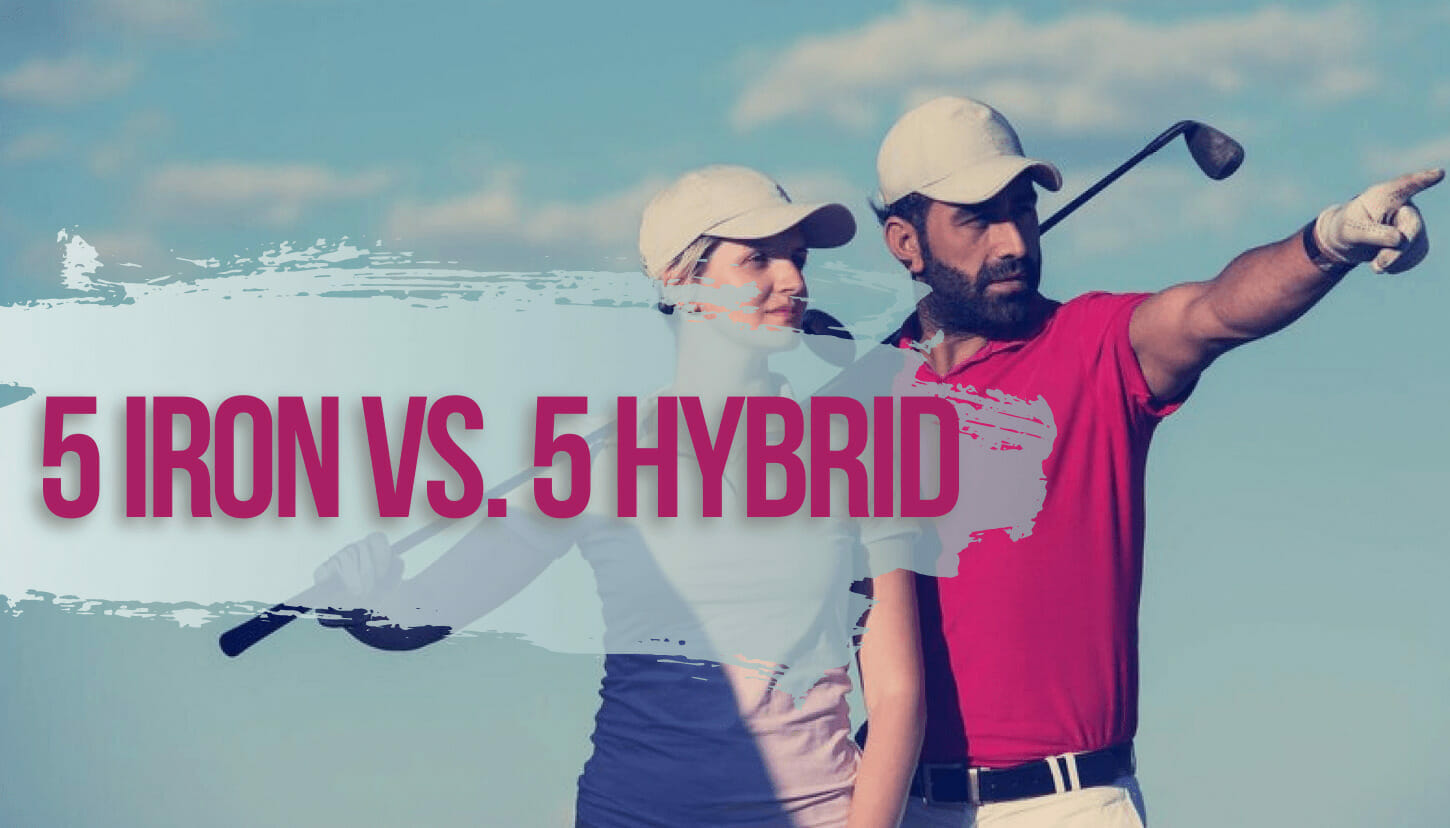 Those who’re just getting into the world of golf may find it difficult to differentiate between irons and hybrids, especially when they share a similar loft. So, if you’ve found yourself having to choose between a 5 iron and a 5 hybrid and thought that the two were interchangeable, you’re not alone! In this 5 iron vs 5 hybrid comparison guide, you might be surprised to learn that this couldn’t be further from the truth (and that the two serve totally different purposes).

5 irons and 5 hybrids are mid-clubs that share a similar loft of 24-28°. The latter has a lower center of gravity, which means it’s more forgiving and provides a higher launch angle. A 5 iron is more versatile but doesn’t work as well as its hybrid counterpart when it comes to game improvement.

As you’ll see in the following sections, the differences between these types of clubs don’t end here, so if you’re looking to make a well-informed choice between the two, read on until the end of this article to learn everything you need to know.

Below, I’ll cover their similarities and differences, along with some tips on which one would be best suited to your needs and playing style. Let’s get started!

Though the fact that the same number is used to categorize these two clubs might lead you to believe that they’re comparable, the similarities between them are few and far between. So, I’ll quickly discuss those before delving into the differences between a 5 iron and a 5 hybrid.

So, what does the number “5” in each of these clubs mean? Golf numbers generally refer to a club’s loft, which is the angle created between a club’s shaft and its face. Determining the right loft for the shot you want to make is essential, as it’ll determine your ball’s launch angle, trajectory, and distance.

Sure enough, a 5 iron and a 5 hybrid share a similar loft that varies between 24 and 28°; however, hybrids usually boast a lower loft angle than their iron counterparts. Keep in mind that this isn’t the case across all brands and models; however, it’s a good general rule of thumb to rely on when making a decision.

Other than that, you’ll struggle to find a common feature of 5 irons and 5 hybrids. Though, in theory, their similar loft would suggest that they’re interchangeable, if you’ve ever tried both of these clubs in practice, you’ll know that that’s not the case. So, without further ado, let’s discuss some of their main differences.

Since we have a lot to discuss in this section, let’s start simple and go through the visual differences you’ll notice right off the bat when comparing a 5 iron with a 5 hybrid.

5 irons, as you’ll also see in the “Length” section below, are usually longer than their hybrid counterparts. They’re also sleeker-looking, which is why many beginners make the mistake of choosing them over hybrids, which are actually far more practical.

5 hybrids, on the other hand, are recognizable by their slightly larger footprint and profile, so they might appear a bit bulkier. Though there might be some inconsistencies in regard to these features between brands and models, these are usually the main visual differences you’ll notice between a hybrid and an iron of the same loft.

As mentioned, hybrids are usually far more forgiving than their iron counterparts. That’s because of their lower gravity center and their larger profile, which makes it easier for the player to hit that sweet spot.

So, if you’re a player looking to improve their performance or simply don’t feel fully at ease using a 5 iron, switching to a hybrid might be a smart move. You’ll still get a similar distance and versatility, but the club will provide an easier, better overall feel.

A 5 hybrid makes it easier for you to control the distance and trajectory of the ball thanks to the fact that it’s easier to avoid mishits. The landing will also be softer when you use a 5 hybrid, while the rollout will be minimal.

It’s natural to wonder: “How come these two clubs can perform so differently when they share a near-identical loft angle?”.

That’s because they’re inherently built differently. Golf club irons boast a classic design and shape that’s been around for a long time, and they’re usually made of wood and steel.

5 hybrids, on the other hand, being a newer invention, benefit from a more optimized shape with a hollow head. They’re also usually made of steel; however, some titanium models are becoming popular as well.

It’s difficult to generalize shaft length in both hybrids and irons, as you’ll find many inconsistencies between different brands and models. That’s because companies want to release clubs that can serve any golfer, regardless of their build.

Hybrids are usually between 0.5 and 1 inch (1.27 and 2.54 cm) longer than their corresponding iron. However, if you’re planning to replace your existing iron with a new hybrid of the same loft, try to avoid more than half an inch difference in shaft length, as that can end up throwing you off your game. So, before you go around shopping for a new hybrid, make sure to take some precise measurements of the iron you already have at home.

According to Shot Scope, hybrids usually allow the ball to travel 8-12 yards (7.3 – 11 meters) farther than their corresponding irons. However, the performance you’ll be able to get with your club of choice will ultimately depend on its quality, your swing speed, and your handicap level.

So, though there might be some slight differences in the distances these clubs are able to achieve, they’re usually not significant enough to color your opinion.

Which One Should You Choose?

Now that you can better differentiate between a 5 iron and a 5 hybrid, it’s time to decide which one would serve you better.

If you’re a mid-to-high handicapper, hybrids are usually a better choice. Their larger heads and easier-to-hit sweet spots make them significantly more forgiving than their iron counterparts, so if game improvement is your end goal, hybrids are the way to go. The same goes for those who have slower swing speeds and don’t want to sacrifice their distance as a result.

On the other hand, if you’re a low-handicapper who’s able to consistently hit the sweet spot without any issues, then the lighter, sleeker 5 iron might allow you to perform better. If you don’t need the extra forgiveness, the hybrids will only be weighing you down.

As you can see, both have their benefits and drawbacks, so I can’t give some sort of one-size-fits-all advice. You’ll have to take the above differences and similarities into account and decide for yourself whether the iron or the hybrid will better allow you to improve your performance.

Though at first glance, they might seem interchangeable, 5 irons and 5 hybrids are actually two completely different club varieties that serve separate purposes, so each of them has its own place in your golfer’s arsenal.

If you’ve found yourself having to choose between the two, remember that neither of them is inherently better than the other and that the right choice for you will ultimately depend on your handicap level, playing style, and overall needs and preferences. Hopefully, the above guide can help you make a well-informed decision.