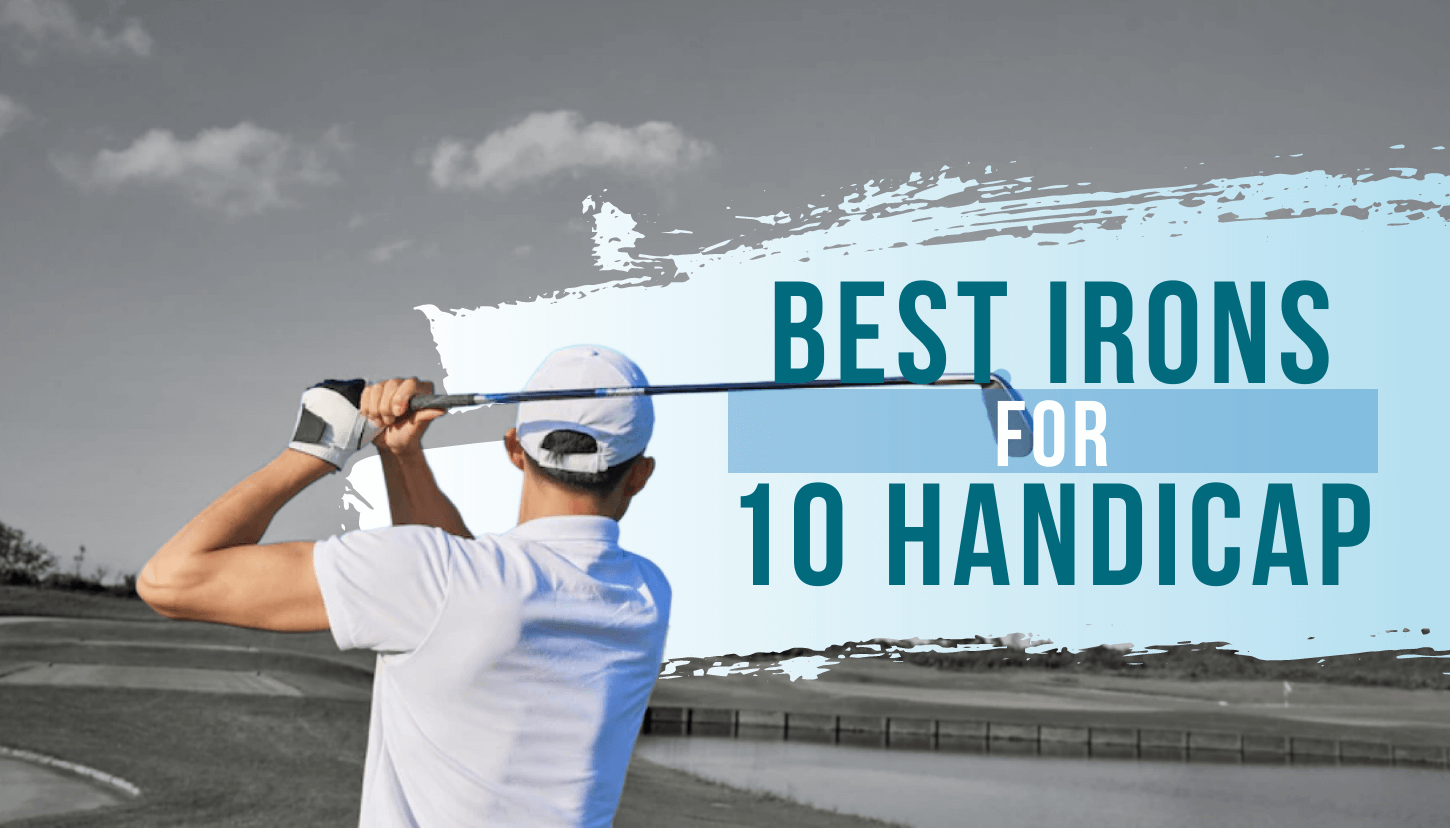 You’ve finally on the cusp of single-figure golf, and ten handicap is the gateway to this level of play. Now, you know that the game improvement irons that got you here have served their purpose, and now you need to find irons that will work for your game – but what are the best irons for 10 handicap golfers?

With a combination of feel and control, while maintaining some level of forgiveness, the best irons for a 10-handicap golfer are Srixon’s ZX-5, TaylorMade P790, Titleist T200 Irons, Mizuno JPX 921, Ping’s i500, the Apex 21 Irons from Callaway and Cobra Golf King Forged Iron Set.

Let’s take all these irons onto the course and examine them closely to see what makes them the best for a 10-handicap player.

What Irons do You Need as a 10-Handicap Golfer?

Most golfers start with game-improvement irons designed for high-handicap players. With their large sweet spots and greater forgiveness, these irons allow players to get the ball in the air more often and straighter.

While these clubs create more consistency, they don’t allow for much shaping, and as you approach the single-figure levels, you need to find irons that will give you more control so you can progress to even lower handicap levels.

You now need clubs that offer less forgiveness but have more feel, distance, and feedback, as well as more spin for stopping the ball on the greens. To drop below the ten handicap mark, these are the characteristics you will need in your clubs.

PGA Champion Brooks Koepka uses the ZX7s, the older brother of the ZX 5’s, but these irons play and perform much like their older brother.

Their forged design and cavity back mean they have forgiveness, and using 1020 carbon steel means less vibration on impact and a softer feel of the ball off the clubface.

As a ten handicap, you will have some mishits, and the ZX5s understand this well, so off-center strikes are still going to fly forward(ish) but not zip off to the jungle as it may happen with blades or clubs designed for sub-5 players.

From the 8-iron through to the pitching wedge, the ZX5s have deeper grooves cut to create more spin and hold on the greens, and this may mean you have to consider a ball change!

Their Tour VT sole is designed to cut through turf easier, which means less drag on the downswing and contact with the ball and the ground.

The added use of tungsten in the toe from the 3-iron to the 7-iron adds to a lower MOI, and this is where the forgiveness in these irons is found and better stability on impact.

Another aspect of clubs suited for this level of play is that they look better, have less ‘fat’ around the edges, and resemble pro irons rather than beginner ones, and even though the ZX5s are for low and mid-handicap players, they look and feel a lot more like those made for scratch players.

Priced at around $1150 per set, the Srizon ZX5s aren’t the cheapest or the most expensive, but they deliver a great feel and overall performance.

As you move to the lower end of the handicap scale, distance becomes more important, and distance is what these P790s specialize in!

Most golfers report a 5-10 yard increase in distance from previous clubs compared to the P790s. This comes thanks to their Speed Foam polyurethane insert that delivers more energy into the ball at impact.

The lower COG in these irons results in better launch angles on the down strike leaving natural divots and a better ball flight.

The face on these irons is 7% thinner, and with the tungsten weighting positioned strategically at the lower back end of the club head, you get more forgiveness, and if you struggled with the ‘thin’ strikes, the TM P790s solve that issue too, giving you more ball speed from strikes lower on the face with their Speed Pocket Technology.

Aesthetically, these irons look the part, and with the thinner topline and face, these forged clubs could be mistaken for blades or pro irons; the lines look like a top-end sports car and, aside from their performance, will look might impressive in your bag.

At under $1000, the Mizuno JPX 921 Hot Metal irons are a super option for 10-handicap players, especially if you are looking for that little extra forgiveness in your clubs.

The Hot Metal (HM) range has a longer clubhead between the heel and the toe, a wider sole, and a thicker top line in these forged full-body irons.

These clubs appeal to the player who wants a slightly bigger club with more forgiveness, like a game-improvement iron,  while retaining the look, feel, and performance of forged irons.

For starters, Mizuno rate this as their fastest iron yet, with the 0,5mm thinner face delivering the highest ball speeds recorded from any Mizuno forged iron. For the 10-handicap player, this means more distance, and that’s already a big box ticked!

To improve their forgiveness, Mizuno has weighted the perimeter and added more toe bias to create less punishment for off-center strikes. The 6,4% larger machined slots deliver even greater stability on impact.

This stability frame, along with the larger clubface, increases the MOI substantially, making these the most forgiving irons, but that’s not the only bit of tech involved with forgiveness.

Thanks to the use of Chromoly, the thinner face, and high frame stability, the sweet spot on these irons is much lower, so the thin strikes come off less thin!

Many golfers associate Titleist irons with pros or elite-level players; the truth is that they have been producing exceptional quality irons for mid- and high-handicap players for some time now, and the T200s are a great example.

These irons would be ideally suited for players with more accurate and consistent swings that need less forgiveness and better sweet-spot performance while still enjoying some benefits from the occasional off-center hit.

Like Taylor Made, Titleist has used significantly more tungsten in their T200s, with the head comprising around 40% of this super strong but very light steel giving it strength and stability through the swing and delivering superb feel off the face.

This technology also helps to create more speed on off-center strikes adding that little bit of forgiveness when needed.

While priced at the upper end of the scale, around $1500, players that regularly hit the sweet spot will love the feel and performance of the T200s.

Mid and low-handicap players will appreciate that Callaway has migrated the Apex range from a player’s only club to make them available for players at all levels.

Much like TaylorMade, Callaway has established their position as a leader in game improvement irons, and their Apex DCB range for higher-handicap players is a testament to that.

However, the Apex 21 irons are smaller and more compact than the DCB range and ideally suited for ten-handicap players that still want good forgiveness, but offer the higher levels of accuracy, spin, feel, and precision needed at this level.

They are thinner along the top line with less offset and use tungsten to improve performance; the Apex 21 offer distance with forgiveness with their long irons, and improved accuracy and precision with their short and mid irons, making them an ideal choice for mid-handicap players.

One of the most notable features of the Apex 21 irons is that they are the first set designed entirely by Artificial Intelligence. Using this method, Callaway has provided a unique club head to every iron in the set.

Investing in research to deliver the perfect head for each iron does position these irons in the mid-end of the price range. Still, their smaller, more compact heads and beautifully forged design make for an elegant but long-hitting, forgiving, and accurate iron, which mid-handicappers will love.

At around $1295 from Callaway, the Apex 21 irons will suit ten-handicap players that want the look and feel of a premium iron while holding on to forgiveness and gaining distance.

Moving to the lower handicap levels in golf can often leave you in limbo between game-improvement irons with more forgiveness and wanting a more ‘players’ type club where you have the sleek styling and faster-launching properties of blades.

Well, the Ping i500 is the bridge between these two irons. Like the other clubs featured here, Ping has taken a thinner club and added some smart tech and materials to boost distance and performance while maintaining empathy with good forgiveness.

Using a hollow-body club with filler is a challenge, but the very smart engineers at Ping have found a way to achieve this by using thinner but higher-strength steel in their construction. By using C300 maraging steel, Ping has achieved both strength and flexibility, and with more mass comes more energy into the ball and more distance.

This design gives fast launch speed and higher launch angles, as much as 10% higher than their competitors, and this makes for impressive ball flight, especially in the longer irons.

This leads to a softer landing with the steeper landing angle, so stopping power from far out is much better on these clubs.

While these are not the newest clubs on this list, their performance and price at around $1100 warrant a mention.

No list of irons for ten handicap players would be complete without a set from Cobra. These irons present like blades but have the performance and forgiveness of game-improvement irons.

Another hollow muscle-back design appears larger, especially from the front with its larger topline and face, but the minimum offset says ‘blade’ in uncertain terms.

As with many other irons featured, the Cobra Forged Tec’s thinner face offers a lower CG, so thin shots fly far and straight thanks to the pursuit of an iron that balances accuracy and distance with a good amount of forgiveness.

With the option of single-length shafts and the inclusion of Arccos Connect Smart grips, the Forged Tec irons are tough to look away from if you want a solid combination of performance, distance, feel, and accuracy.

This iron is best suited for players that would not be put off by the smaller, more compact design and are looking to hit the center more often than not. Doing so will give you incredible distance as they have done on previous models with their tungsten weighting in the hollow.

The offset and size are similar to TaylorMade’s P790s, and the stability in design means less vibration on impact.

These won’t break the bank either at around the $1130 mark, and if you are looking for a visually impressive iron that offers solid overall performance, then the Forged Tec irons may find themselves in your bag.

When choosing clubs for a ten handicap, there are some great options available, and the price is a consideration. But the major club manufacturers know this is a large market, and they have come to the party offering a range of irons to suit every type of game.

Remember to take your time, test drive a few sets, and be in tune with what feels and performs best for you, regardless of the specs and technical info, because golf at single handicap level is more about feel and choosing the right set of irons will be critical in getting you there.