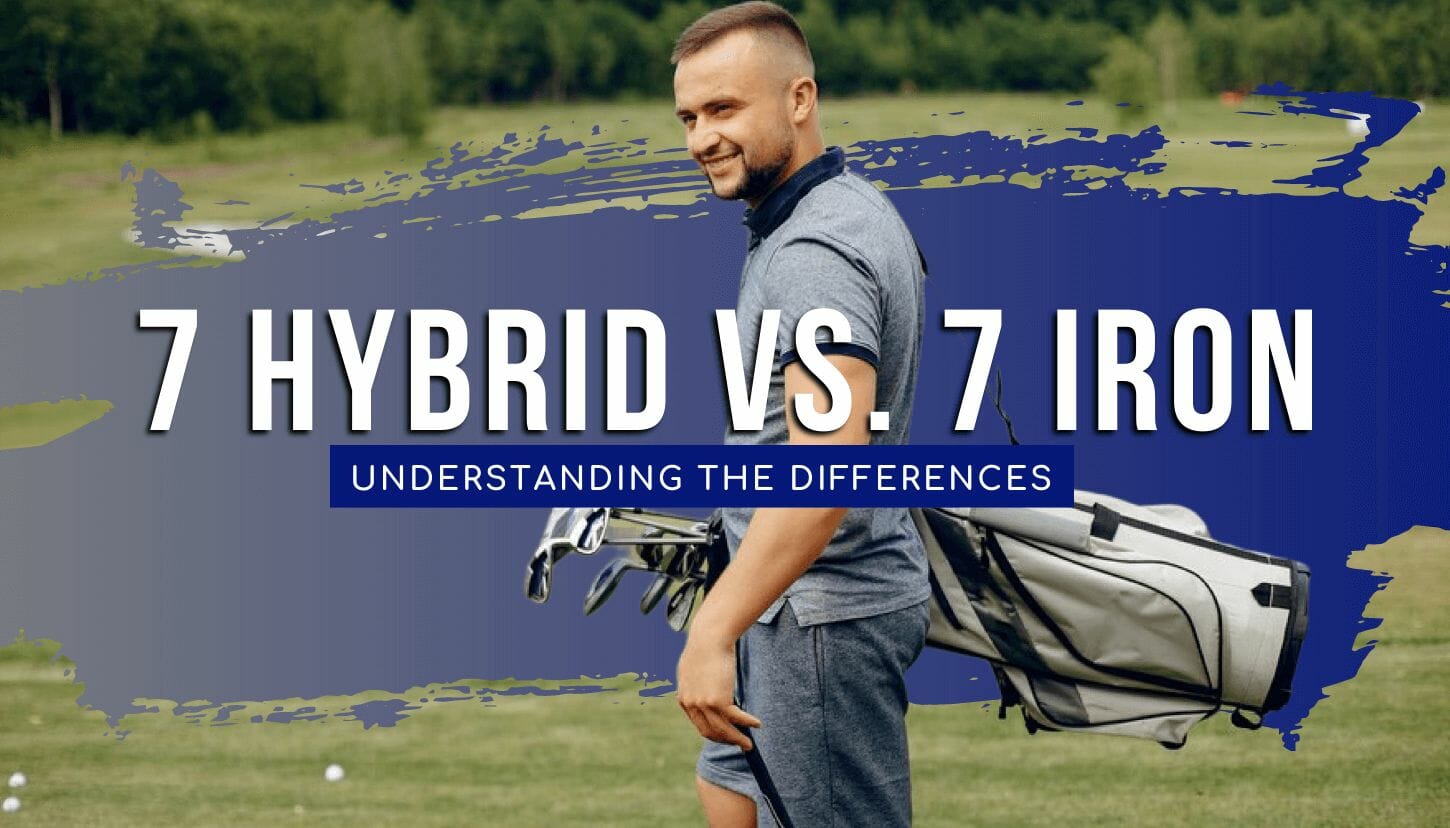 Golfers often face the choice between using a hybrid or iron club for various shots on the course. But what are the actual differences between a 7 hybrid and a 7 iron?

Well, in this article, I’ll delve into the specific differences between 7 hybrid and 7 iron clubs, including their design, use, and performance. Let’s begin.

7 Hybrid vs. 7 Iron: How Are They Different?

While the surface-level difference may seem quite minor, the real-life implications of how this plays out on the golf course can have a genuine impact on your game. So, it makes sense to delve a litter deeper into the details.

7 hybrid clubs are designed with a combination of features from both woods and irons.

They have a larger head and a deeper center of gravity than iron clubs, making them easier to hit and more forgiving on mis-hits.

The clubface of a hybrid is also more angled, allowing for a higher launch and a softer landing on the green.

7 iron clubs, on the other hand, have a smaller head and a more shallow center of gravity than hybrid clubs. This gives them a lower trajectory and more control but can make them more difficult to hit consistently.

The clubface of a 7 iron is also less angled, resulting in a lower launch and firmer landing.

7 hybrid clubs are commonly used when a golfer needs a bit more distance or forgiveness than what a fairway wood or long iron can provide. This can include approach shots from the rough, long bunkers shots, or fairway shots from tight lies.

7 irons are part of the “irons” group of clubs, and are meant to be a part of a full iron set. 7 iron clubs are typically used for more precise, controlled shots, such as approach shots from the fairway or delicate chips around the green.

They’re also often used for longer approach shots where a golfer needs to shape the ball to a specific target.

One of the main differences between 7 hybrid and 7 iron clubs is their performance in terms of distance and accuracy:

7 hybrid clubs tend to have a slightly shorter distance than 7 iron clubs, but they offer more forgiveness on mis-hits and a higher launch for softer landings.

This can make them a good choice for golfers who struggle with consistency or who prefer a higher, softer shot.

Equally, 7 iron clubs offer more control and a lower trajectory, which can be beneficial for golfers who prefer a more piercing flight and firmer landing. However, they require a higher level of skill and precision to hit consistently.

In terms of overall performance, the best choice between a 7 hybrid and a 7 iron depends on the needs of the golfer. Factors such as skill level, course conditions, and shot-shaping ability can all play a big role in the decision, too.

When you’re choosing between a 7 hybrid and a 7 iron, it’s essential to consider the pros and cons of each club.

Both 7 hybrid and 7 iron clubs have their unique strengths and weaknesses, so the best choice for you will ultimately depend on your personal preferences and abilities as a golfer. But it’s worth understanding what each club offers.

Tips for Choosing Between 7 Hybrid and 7 Iron Clubs

So, how do you choose between a 7 hybrid and a 7 iron? Here are a few tips to consider when you’re trying to decide which club you should use in any particular golfing situation you come across:

Each of the 7 hybrid and 7 iron clubs has its own strengths and weaknesses, and which club is right for you will depend on your preferences and abilities.

Hybrid clubs have a shorter distance and a higher launch, but they’re easier to hit and more forgiving. There’s more control and a lower trajectory with iron clubs, but they are harder to hit and less forgiving.

When choosing between a 7 hybrid and a 7 iron, take into account your skill level, comfort level with each club, and the specific shots you’ll be facing on the course. Considering the pros and cons of both clubs at the driving range can also help you decide.