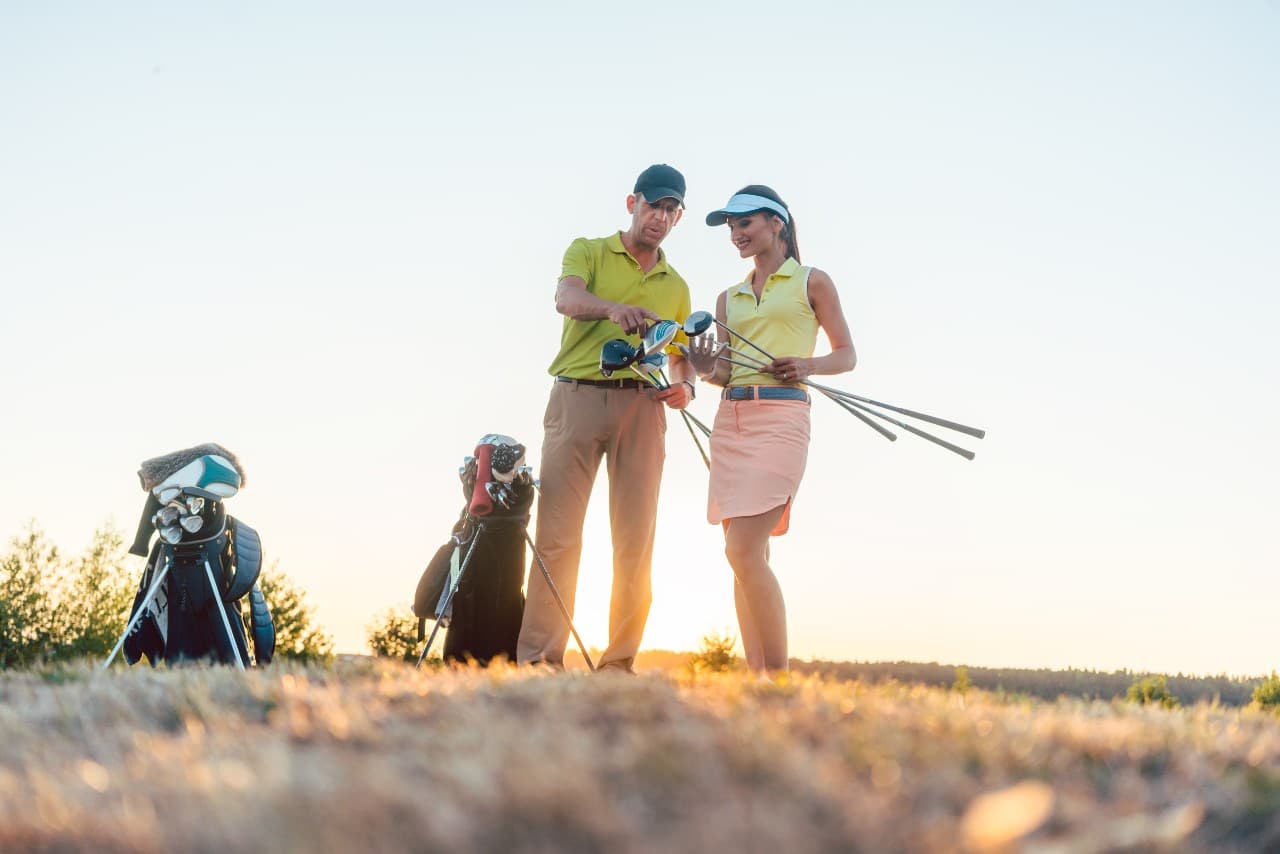 When I ask new or aspiring golfers about what intimidates them the most, when to use what golf clubs? is always top 3. Undoubtedly, the equipment used for golf is among the most misunderstood aspects of the game due to the incredibly jargon-heavy language used to describe every club.

The reality is that you could play the game with two clubs: one that hits the ball a respectable distance through the air (at least 100 yards) getting the ball off the ground to clear obstacles such as water, sand etc., and one that you can use for rolling the ball into the hole. However, if you want to be a better golfer, the best approach is to know which is the best golf club for every situation.

Here are some rules-of-thumb for when to use what golf clubs:

Stick around, because we’ll talk about the four main categories of golf clubs, and when to use them. We’ll discuss whether you actually need the maximum allowable number of clubs (14) or whether you’re better off working with fewer clubs to simplify club selection.

When you’re done with this article I hope that you can confidently build a golf bag that will allow you to get out on the golf course and start falling in love with the incredible game of golf.

Golf drivers are the most familiar clubs for people who have never played the game.

Drivers and woods have large clubheads, and recent designs actually look a bit ridiculous with how huge the club heads are (maximum 460cc). However, the design is driven by function.

Drivers have large heads because this is usually the first club you swing on par 4 and par 5 holes. This is the club in your bag that you should theoretically hit the farthest, all design and marketing elements around drivers are about distance!

The average man can hit a driver about 200-220 yards, and the average woman hits drivers about 150-175 yards, but every single yard counts with this club.

The large head allows you to hit the ball as far as possible, and also helps with “forgiveness” an essential characteristic for all clubs.

Forgiving clubs allow you to mishit the ball, and still produce a straight-ish trajectory, keeping your ball in play.

The driver is the first club you will hit on longer holes, and it is almost exclusively hit on the tee box with a tee to set the ball off the ground allowing you to get maximum distance from your driver.

When to Use Woods – Distance Part II

Woods are essentially smaller drivers. They are shorter in length and the clubheads are smaller with more loft.

Woods won’t give you as much distance as your driver, but they are easier to hit off the ground once you are on our second shot.

Most people carry a single wood called the 3 wood which is the club they hit the furthest off the ground, when they can’t tee the ball up (technically the driver is also a wood, and is sometimes referred to as a 1 wood).

To demonstrate when you might hit a 3 wood, imagine you hit your driver 220 yards for your tee shot, on a 500 yard hole. You still have 280 yards to go to the center of the green.

In this case you still want to hit the ball as far as possible.

The large head of your driver makes it particularly difficult to hit with the ball on the ground. The 3 wood, with its smaller clubhead, is a lot more straightforward to hit off the ground. If you hit this club about 200 yards for your second shot, now you only have about 80 yards to the green!

When to Use Irons – Precision Over Power

Irons are the usually the clubs in your bag that you will hit the most.

Most people carry at least 4 irons, with each club having a slightly different loft and length, allowing you to hit them different distances. The idea here, is that if you produce a consistent repeatable swing, you should be able to make an iron choice based on the distance you need to go to reach the green.

I normally recommend that irons should be the second club hit on par 4s after the driver, and the third club on par 5s to cover that last bit of ground to get to the green.

For example, if on a 380 yard par 4, if you hit your driver tee shot 220 yards again, you will still have 160 yards to the green. This distance is too short for your 3 wood which we know goes 200 yards, so now we select probably one of your irons to cover the 160 yards and stop the ball on the green.

Which iron you choose will depend on how far you hit your irons.

The irons are tools of precision, not power.

You have to dial in the exact distance you want to hit the ball before you choose your club. You can dial in your iron distances by going out to a driving range with defined targets and hit several shots with each iron to get an idea of the average distances you can achieve with each iron.

An added benefit of irons compared to woods is that they produce higher ball flights than woods, so when irons are used to hit a ball towards the green, the ball is likely to land at a steeper angle reducing the likelihood of it rolling off the back of the green.

Often times a wood produces a lower ball flight and even if the ball lands on the green it is very likely to quickly roll off the back of the green.

Irons also include a category of clubs called wedges however I firmly think of them as irons since they are simply the shortest irons in the bag.

These clubs usually have very high lofts producing high flying shots around the green to drop the ball close the hole with excellent precision. Many people carry 1-3 wedges of differing lofts tailored to their preferences around the green.

When to Use a Putter – Finesse & Control

This aspect of the game is dictated by a smooth controlled, and relatively slow swing, ensuring clean contact with the ball to produce the perfect roll on the perfect line.

These clubs are not meant for fast swings, and high impacts, however they can often be the most expensive club in the bag. A good putter if cared for properly can last a life time.

A putter is only used on the green and should never be used on harsh surfaces such as sand, dirt etc.. Ideally you should only need 2 putts to get the ball in the hole on every green.

How Many Clubs Do You Need?

This is the main question asked by most new golfers. This question has several merits.

First, the increase in golf clubs makes it more difficult to make choices on golf course.

Secondly, golf is an expensive hobby to start, even if buying used equipment.

My advice to most new golfers is to build a bag around a few basic clubs. I recommend they start with a driver, a 3 wood, 6-9 irons, 2 wedges such as a pitching wedge included with most irons sets and a sand wedge, and a putter, for a total of 9 clubs.

The maximum number of clubs allowed in the bag is 14, however I truly believe that new golfers and even some experienced golfers can benefit from playing with 9 clubs.

Additionally, this also allows you to practice 9 clubs at the driving range more thoroughly rather than dividing your practice time across 14 clubs.

As you improve, I recommend adding clubs between your 3wood and 6iron giving you some options for those “in-between” distances you frequently face on the golf course, and then if you still have spots in the bag you can add a wedge or two to dial in your short iron game around the green.

Conclusion: When to Use What Golf Clubs

Above all, it doesn’t matter how many clubs you have as long as you at least have two, like I mentioned at the very beginning of the article. Golf is a fun but expensive hobby to get into, so I would rather you play with one iron and a putter, than not play at all. As time goes on build your bag best fit to your needs and financial limitations! Now that you know when to hit your golf clubs, see you on the course!