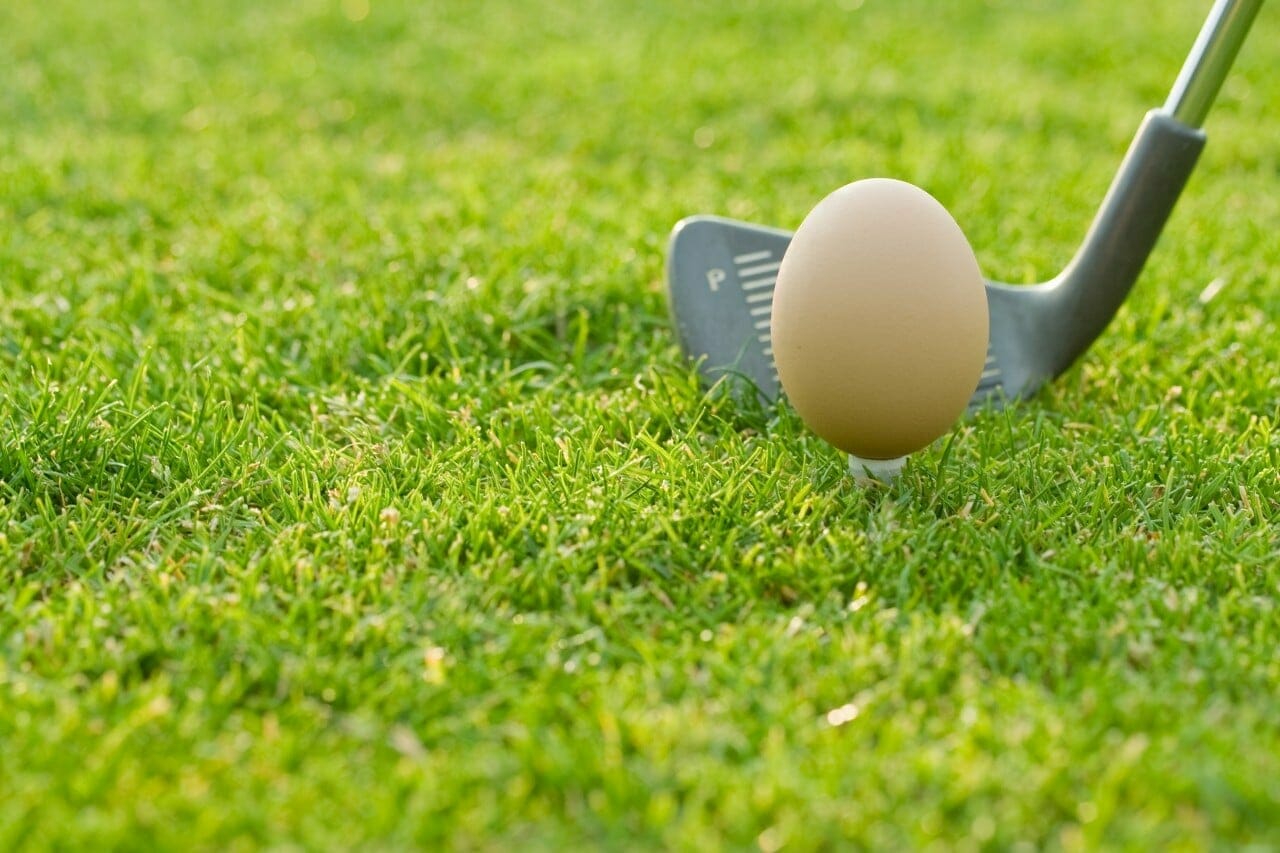 What is a golf scramble? The popularity of golf means that we see people come up with different formats of golf every day. But one golf format that has gained fame across different regions is the golf scramble format. If you do not know what a golf scramble is, here’s a detailed explanation to help.

So, what is a Golf Scramble? A golf scramble is one of the most common formats for golf tournaments. Here, four team members typically make up the playing team, and each member has to hit their ball throughout the match continually. As part of the team captain’s job, they would choose the best shot from the first stroke from where every player would play from.

After the first playing round, the captain would oversee another round of strokes to select the new location where the balls would be played from. This process continues for many rounds until all the holes are completed.

This type of golf tournament is characterized by relaxed playing rules and less pressure to break any records, so you’ll commonly see it in charity events. The playing rules are relatively informal and can be modified to suit the wishes of the organizer. This lack of standard rules by any official governing body makes it one of the most flexible golf tournament formats available today.

As expected, there are several different variations of golf scramble to choose from. Your choice of variation can either make or break the golf event.

In some cases, the team may decide to play a scramble golf variation that speeds up the pace of play, while in other situations, they may decide to slow the game’s pace. In the end, it all depends on the players and what they want.

Here, let’s review some of the common variations of golf scramble:

Like the regular golf format, the Texas golf scramble allows for four members in each team. It also adopts similar rules to the traditional format. However, there are a few areas where you may notice minor differences from what you are used to in regular golf formats. For instance, members would typically be required to contribute a minimum of four drives from the beginning of the series to its end.

Florida scramble is another prevalent Variation of golf scramble. Here, golfers are mandated to miss the next stroke because their ball has been selected during a previous stroke. Therefore, the game is characterized by at least one team member skipping each stroke.

Like the Texas scramble explained above, this variation typically features a four-team format, and it involves using a six-sided die. Here, a dice is typically rolled on each hole during that round to decide who’s drive would be used.

The Ambrose variation of scramble golf typically combines a scramble with team handicaps. This setup means that the result of each play can be calculated with net scores that are usually based on your team’s handicap.

Although often referred to as one of the most informal golf games, organizing a golf scramble outing can still be a hard mountain to climb if you don’t know how to go about it.

Unfortunately, some people make silly mistakes that ruin the game during the organization. To help acquaint you with the proper organization process, here are some step-by-step tips for organizing the perfect golf scramble event:

1. Figure out your budget

Like in every other thing, your budget plays a vital role in determining how your game would play out. It’s important to note that the outing might seem overwhelming, especially as you begin executing your plans. Most courses would require massive deposits for reserving a legion of tee times. In addition to paying for course reservations, several other areas require monetary service, and we’ll talk about some of them in subsequent points. Calculating your budget beforehand would help to prepare you to scale through obstacles that may come your way.

Yes, we’ve talked about how expensive organizing an event can be. However you choose to look at it, the truth remains that you’ll need huge amounts of money to take care of a lot. Since golf scrambles are mostly organized as charity events, the most viable source of revenue is through endorsements. You can also raise some money from charging entrance fees and signups, but these receipts are usually a small fraction of what you’ll need for the event.

Sponsorship and ads are the primary sources of generating funds. You’ll find companies that will pay so much to advertise their brand on a tee box or near a green. There are also cases where entities can choose to sponsor the whole tournament to promote their business near the clubhouse or anywhere that guarantees visibility. There are also instances where such benefactors can donate gifts and rewards for the success of the event.

We recommend targeting groups with some connection to your cause. Such groups would easily relate to your proposal and be ready to help out in the best possible capacity.

3. Choose a golf course that suits

It’s only when you set out to look for a golf course that you’ll realize that different golf courses have different prices, remoteness, and difficulty levels. Over time, I’ve had experience working in different courses, and I’ve seen golf outings go wrong because courses are the wrong match for the event.

Any of the three factors mentioned above can cause course frustration, and that’s the last thing you want when you’ve typically set out to enjoy an event. When planning an event, it’d be best to consider green fees. Moreover, it would be best to choose a centralized location because players would not want to drive too long to get to the course. Additionally, playing in a centralized location would help in the event someone gets overserved at the event. They’d still be able to afford a cab ride to their destination.

It may not be as easy as it sounds to find a course that fits the three factors listed above, but it’s worth every stress you’ll put into the process.

4. Determined who would run the show

Despite the relative informality of the event, golf scramble players still often lose their composure and act like juveniles. Unfortunately, it takes more than one person’s skill to hold control of everybody, and that’s why you need a team.

Most experts recommend that you have at least two friends assisting with the event coordination. If you are still struggling with acquainting yourself with the intricacies of golf, it’d be best to enlist three or four volunteers to help. While doing this, ensure that a minimum of one volunteer understands how the sport works.

Having more hands on deck will help ease the stress during the planning stages since it helps divide the tasks so that nothing goes unattended to efficiently. The additional hands available can also help direct traffic and smoothen the signup process when attendees arrive in their numbers.

For the most part, the first point is quite straight to the point. I always recommend shotgun tee times for people whose outing is more than six groups. This would typically mean starting your party simultaneously on different parts of the course. Perhaps the most significant advantage of this system is that it allows everyone to finish almost around the same time, making the event more compact and less time-consuming.

On scoring, you’ve already chosen golf scramble, so it’s easy for you to opt for the popular scoring format where everybody hits from the same spot and proceeds to pick the best shot and go on from there.

While the provision of food and drinks is always the duty of the course, it’s still essential to check whether you can bring additional food for the event. Some courses would allow organizers to set up grills and barbecues, especially since some money goes out to charity in this golfing format. You can also try outsourcing the catering job if you are in for it.

One major mistake players often make is bringing alcohol to the course. We often advise against this act as it may violate the laws in many states and cities. Before the start, you can contact a course representative to make inquiries on the dos and don’ts of the course.

In addition to their money, your attendees are also investing their time in the event. They expect you to go the extra mile to create an enjoyable environment that benefits their contribution and has future value to them.

If you do not know what to do, here is a list you could pick from

If you want to take it a notch higher, you can organize raffle draws or auctions for golf courses. You can also print customized shirts to be used as giveaways. Whatever you choose to do, make sure players would have a smile on their faces when they look back and remember the event years later.

There are so many things you can do to light up moments after the event. Some clubhouses offer banquet or party rooms. If you can afford the cost, this is one option that you could consider.

On the other hand, you can go for cheaper options like renting a nearby bar for an after-party. You’ll find the cost of drinks cheaper than what’s usually offered at the course. Beyond that, the change of climate would be enough to put anybody in the right spirit for the night. If this is an option you want to explore, we recommend grabbing a location close to the course to cut down on the cost of logistics.

Conclusion: What is a Scramble in Golf?

If you organize a golf scramble tournament, we recommend sourcing for finance from ticket sales and contributions. Beyond financing it, there are other tasks that make the event worth attending, and we’ve reviewed some of them in this article.