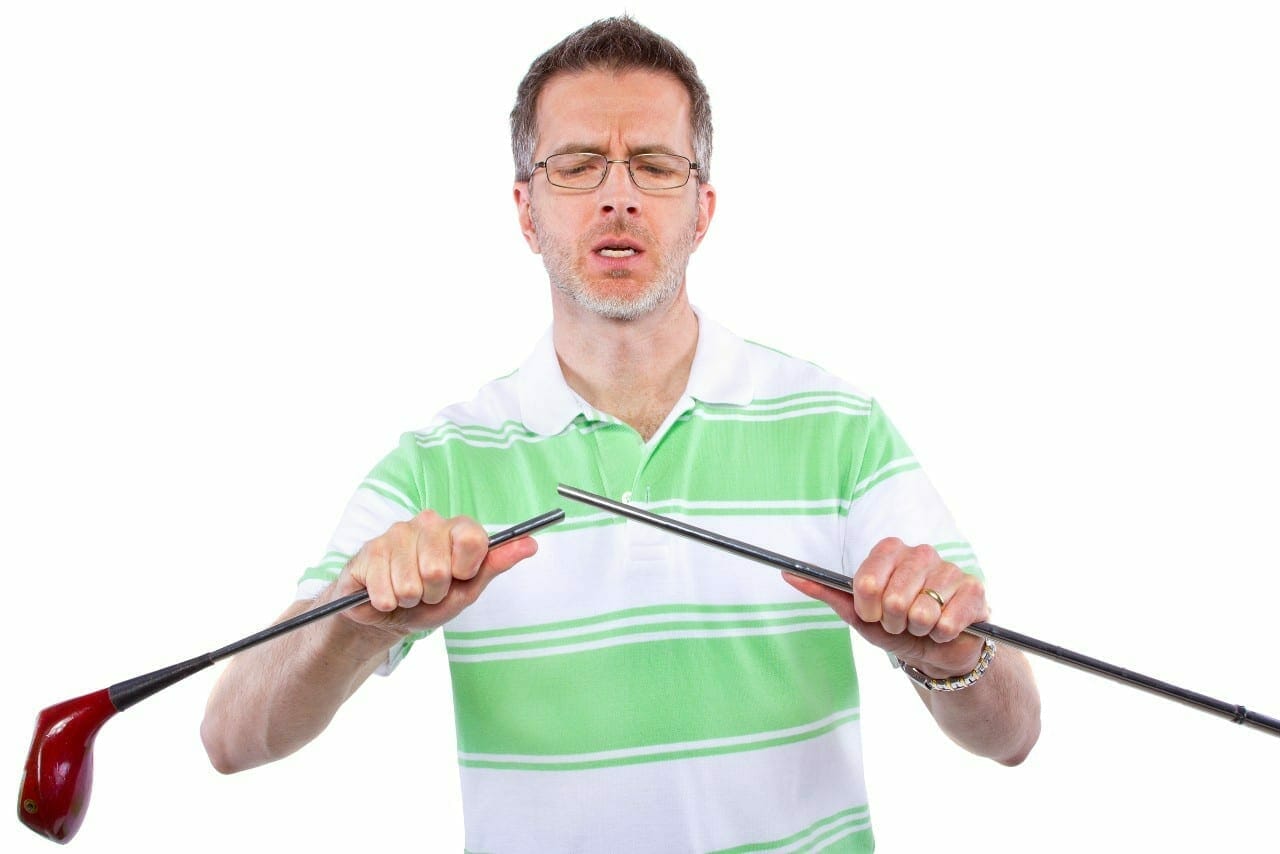 What are golf clubs made of? 18th-century British poet Robert Southey said boys are made of snips and snails and puppy dog tails while girls are made of sugar and spice and all things nice. He never said a word about what golf clubs are made of. That’s strange since golf originated in Scotland and the sport was so popular Parliament banned it for decades, in 1470.

So, what are golf clubs made of? Golf clubs are made of either metal alloy or carbon fiber composite (usually graphite). Purists willing to pay a premium can still find clubs or clubheads made from wood. Clubs have improved dramatically from the sticks and clubs historians say were first used to hit pebbles more than 500 years ago.

The rules of golf formed by the U.S. Golf Association limits the number of golf clubs you can carry in your bag to 14. Most golfers carry two or three woods and a putter; all the others are irons. The clubs have a club head that gets attached to a shaft. The shaft has a grip at the top of the handle to give better control and reduce slipping.

Your woods have the longest shafts and biggest club heads of all the clubs in your bag. That’s because they’re designed to hit balls long distances. Almost every golfer has a 1-wood, called a driver.

Your drivers typically have the lowest amount of loft and are usually only used from the tee. That’s because the bottom is rounded and that makes it unsuitable for hitting fairway shots. The other woods in your bag are called fairway woods because they work just as well on a long fairway shot as they do from the tee box.

A good golf driver can help a golfer consistently cut strokes from their score because it can send a tee shot the furthest of any club. Because of that,  some people spend hundreds for a really good driver.  Some golfers will spend even more.

The gold standard of drivers is the Honma Beres 5-star driver, at $4,500.  The shaft is a metal core enhanced by fiber overlay but the club head is made of wood inset with precious metals, like gold. Yes, it is a wood that is still made of wood.

“The process in making of our driver starts with a block of persimmon head and then it gets rolled over to the CAD design and final finishing to a metal head,” explained a Honma employee.

Standard sets of clubs include a 3 and a 5-wood. There is a 7-wood but it’s not something you see every day. In fact, I have never golfed with anyone who carried one in their bag. Have you?

Woods are called “woods” because, until the 1980s, they were made from wood. The shaft was often made from hickory trees and the head was most often made of persimmon. These days, the shaft of your “woods” are likely made of graphite and the head is probably made of a metal or a composite. But, the set of the 1-7 woods are still called woods to distinguish them from your irons.

Many golfers were happy when woods made of metal and composites became available because they didn’t break as easily as ones made of wood.

Commonly, golfers carry 3-9 irons as part of their club lineup. Although there are 1-irons and 2-irons, you don’t see them very often. These clubs got their name because they were originally made from forged iron. Just as woods were made from wood, irons were made from iron. Marketing wasn’t the thing back then that it is now.

The shafts of most irons are cast from steel alloys. The technique of investment casting, a method of casting to enhance the perimeter weighting of iron clubs, was commonplace by the 1970s, and a decade later “woods” made of metal were in widespread use by tournament professionals, according to Brittanica.com. Forged irons can still be bought, though they are more expensive and harder to find.

For instance, Taylor Made’s Tiger Woods irons (P7TW) are made from stainless steel. According to a company employee I chatted with, the head is forged, then milled before its attached to the shaft.

You can watch one of their videos to see steel being poured into a mold and watch a machine grind out the clubface grooves and then have the edge milled by a computer-controlled machine.

A wedge is a special type of iron that is useful for shots that are too short for your 9-iron and have higher lofts than other irons. Most pitching wedges have lofts between 44 and 49 degrees.  Other, specialized wedges include sand, lob and gap wedges and each has a niche use.  Since you can carry up to 14 clubs, you should have room in your bag for at least one more wedge.  They are typically made of the same metallic or fiber that other irons are constructed from.

Putters are the strangest animal in most golfer’s bag because if a non-pro will customize a club, it will be the putter.  Serious golfers will spend a lot of money in search of a driver that will reduce their score but they usually buy the same expensive driver that others like them buy.

There is such a demand for custom putters that a number of small, independent artisans create custom putters for reasonable amounts that many golfers can afford. Custom putters are an affordable luxury for serious golfers because they can be created for a few hundred dollars, or less.

One custom putter creator explained to Golf Digest he, “works with a variety of metals—from common stainless steel and copper-nickel alloy to the more exotic Damascus steel and layered steel laminate Mokume-gane historically used to make swords” to make putters.

Conclusion: What are Golf Clubs Made of Today?

Almost all clubs currently on the market are metal or graphite clubs but there are specialty brands that will craft a wooden club, at a much higher price. Also, older style irons made of forged steel, instead of cast alloys, can be bought if you’re willing to spend some big bucks. Since forged steel works better for players who like to fade or draw their shots, there are club companies that meet that demand.