So, for those of you who do feel they could improve their distance and ball speed, this could very well be the club you need. See below for our full review, comparing the most notable PROS and CONS of this club, see if it’s right for you.

Let's get stuck in, the Aeroburner by Taylormade, we can only get in this kind of product in a matte black or matte grey finish which I really like, I personally prefer my clubs to have a sleek 'professional' style.

Let's get stuck in, the Aeroburner by Taylormade, we can only get in this kind of product in a matte black or matte grey finish which I really like, I personally prefer my clubs to have a sleek 'professional' style.

We get a slot on the bottom of the club, very heel-toe weighted and there you got a kind of cut out cavity at the back so it's their really gain friendly iron. Also, you get a little white marker point to line up on the bottom which Is naturally very helpful, the white groove at the bottom helps one set that Club down by the ball.

You see a little bit of the club out the back which will upset some to a degree, but I think it adds to the chunky appearance which I personally find promising.

"An Iron which doesn't just improve your game, it pushes the boundaries .."

You’ll notice it's got slots on the bottom, but it has no slots on by the face, the regular use of slots in TaylorMade products is expected but all of a sudden, we don't need slots on the face on this one.

So, what TaylorMade is trying to say by doing this and I can kind of understand this, but it also puts it into perspective of why other brands have chosen not to put slots on their faces is that because the way it's so far back off the face it's no longer necessary to receive consistent results. Kind of like a driver in a way but obviously, this is not a driver.

So normally an irons weight is on the face but because you get off the face and out in the heel and the toe it's got all the stability and all the M.O.I it needs the slots wouldn't actually add anymore because it's maxing out anyway.

Now the high-low M.O.I eye is not as high unless they put the slot in.

It looks nice. It's quite chunky it reminds me of some of the club's I'm using at the moment, not to everyone’s taste necessarily.

There is a thing with these I always think about if we just go back to looks before I start and it has got a little bit of offset which I don't mind in this club I expect it and you do see the heel-toe out the back and I love the grey finish it's quite a chunky top-line it's really friendly.

How does the Aeroburner perform?

So, let's hit a few I'm going to hit a couple to start and I've actually captured some data with it with mine and which I’ll talk to you about in a second.

I mean it goes like a 4 iron It doesn't go in a 6, now these are strong in lofts like you would expect but they're strong in lofts because they're going to be high launching because of the weight off the back and the rest of it.

Now, for me it seems that the Aero burner it's there because the driver and the fairway is such a strong brand at the minute, then why would you not have an iron. From a critical perspective it could seem like this is more of branding attempt by Taylormade and this iron hasn’t been released because it revolutionises how an iron is used.

Yet, this iron has undoubtedly improved my game after having to slightly adjust my set to it, I really like having it with my Cobra King ltd driver in my bag.

I feel like it's a good-looking Club and I think for lots of people that kind of power it brings will help them, but I do worry about launch.  I've got some of my numbers on it; I carried one 189 on a 6 iron.  Peak height was averaging 31. I personally, would normally get a 6 iron on about 33ish so it’s a little low, if losing out on a couple of points of loft could be a deal-breaker for you I encourage you to try the Aeroburner iron on a club simulator such as the GC2 or SkyTrak to test your personal preferences and results.

Launching at 16 degrees my result which had a roll of just over 200  but I wouldn't expect my ball to be rolling that far personally on an average green.

I reckon you would carry this over 200 yards when you look at the fly, despite being a 6 iron it seems to be able to function like a 4-iron. If you decided you want to try replacing your 4 iron, I would not recommend replacing your 4 iron with a 6 iron straight away without at least a small period of testing to see if your set need rejigging. Perhaps a fitting session would be appropriate if you're completely on the fence.

I was presenting an average of 20 degrees dynamic loft great for the marketing great for the sell, really though you need to work out if you want a 600 to go that far. 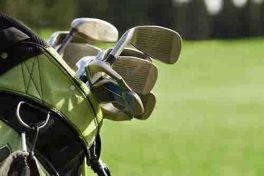 The Taylormade’s Aeroburner iron is a great club. It feels absolutely great and as you know I like the looks, it’ not a new kind of look for clubs but Taylormade have made it their own. I personally, in terms of appearance, prefer sleek and simple designs. A couple of tests in and it was clear that this premium iron exceeds expectations in forgiveness and distance.

In a way the iron felt a bit funny to use, it felt like it could really be a hybrid between a 4 and 6 iron, capable of fulfilling those roles. Not that replacing your 4 and 6 irons with an Aeroburner here is going to instantly improve your game, this is the sort of iron that just starts to click with you more with every shot.

If you are after an iron that is able to give you a strong loft then this really could be the iron that you have been looking for.