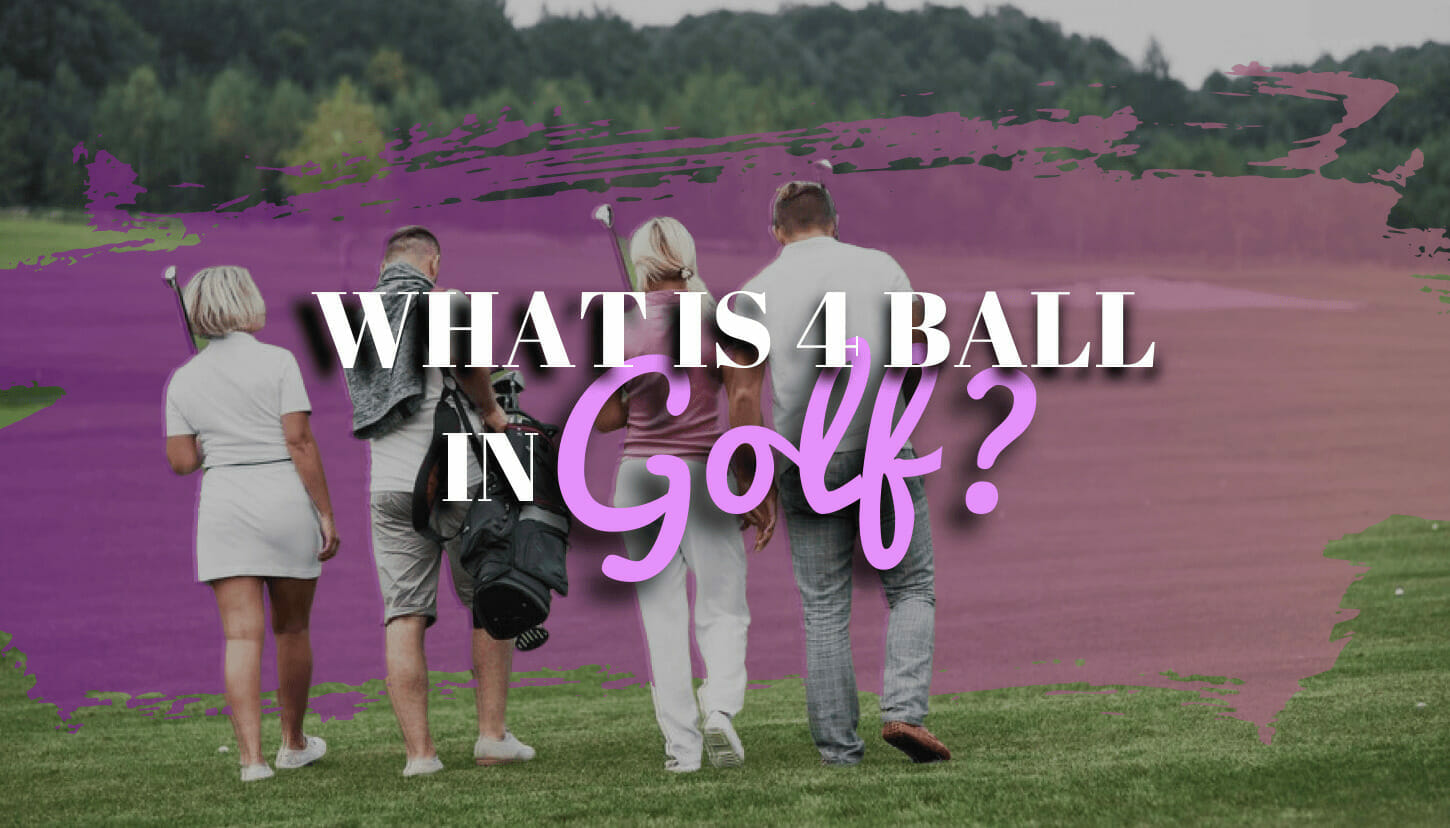 A game as full of tradition and history as golf has some terms and play styles that might confuse newcomers, and 4 ball is one of them. If you’ve been invited to play with friends and you hear that it will be a 4-ball golf game, you may wonder what it is. So, what is 4 ball in golf?

Four-ball is a type of golf game played in teams of two. It is also known as “best ball” or “better ball.” You play as you usually would, each player with their own ball, but your team’s score is the lowest score between the partners. If you see your partner will win, you don’t have to finish.

Four-ball is a relatively new style of golf rapidly gaining popularity, so much so that it’s even played at some significant team events. Let’s look more closely at the ins and outs of four-ball in golf.

What Is Four-Ball In Golf?

Four-ball is a style of golf that’s played in teams. Each team consists of two players, and each one of the partners will play the game as usual.

The difference comes in when you calculate the score.

The lowest score in the team determines the team’s score. For example, if your partner makes five on a hole and you make four, your score will be your team’s score since it was the lowest.

Another important rule of four-ball golf is that you don’t have to complete a hole if you can already see that your partner’s score will be better than yours.

For example, if your partner is already on the green, but you need at least another stroke or two to get there, you may pick up your ball and not complete the hole. Your partner’s score will then be your team’s score by default.

Does Four-Ball Work in Match Play or Stroke Play?

Four-ball can be played with either stroke play or match play.

In match play, each hole’s score will be determined by the team member with the lowest score for that hole. The same applies to stroke play, but a team’s final score will be the total number of strokes by the winning partner for each hole.

How do Handicaps Work in Four-Ball Golf?

According to the Royal and Ancient Golf Club regulations, four-ball stroke play competitions will allow each player 85% of their handicap allowance, rounded up or down as needed.

For match play rules, the handicap allowance is 90%, calculated on the difference between their handicap and that of the lowest handicapped player in the match. The total must also be rounded up or down as needed.

Other Rules Of Four-Ball Golf

The rules of four-ball are the same as for other types of golf, but with a few changes and exceptions.

What if Neither Player Holes Out?

At least one player on a team must hole out. If neither player holes out or both fail to complete a hole for some reason, the following applies:

In four-ball, when the team indicates the score for a hole, they must write the player’s handicap next to it. This is to accurately calculate the final core while making provision for the correct handicaps in every situation.

The team may write both players’ scores (and handicaps) on the scorecard, but only the lowest (best) score of the two will be counted for the win.

The Name of the Scoring Player Must be Indicated

Along with the handicap, the name of the player whose score is used for the hole must be indicated next to the score. Failure to do so will cause the team to be disqualified.

Rule 11.2 deals with the touching, stopping, blocking, or deflecting of a golf ball. According to rule 11.2, any player who stops or deflects a ball in motion will be disqualified

The rule still applies to four-ball, but with one exception.

One Team Member May Represent The Team

If a player cannot make it to a game for some reason, or if they are late, their team member may start (and even complete) the game without them. Only one player’s score will count for the holes they play alone. If the other player is only running late, they may join the game between holes, not while the other players are in the middle of a hole.

The Non-Playing Partner May Not Interfere

When a partner isn’t playing, they are not allowed to tamper or interfere with their partner’s playing in any way. They may only do what a caddie would do, for example, giving advice, placing markers, and picking up or placing the ball.

Similarly, any actions a player takes out-of-turn will be counted as their partner’s actions, except if it results in a penalty other than disqualification.

Each player will be penalized for their actions, not their partner’s. If the infraction deserves disqualification, though, both players will be affected. This means it’s up to each player to keep their teammate in check, as it’s in their best interest, after all.

This wasn’t always the case, but the R&A recently modified rules to allow players to share clubs.

The only requirement is that the total number of clubs between the two players must not exceed 14.

When And Where Did Four-Ball Golf Originate?

The Royal and Ancient Golf Club published the first rules for four-ball golf in its rulebook in 1908. The rules then were more or less the same as modern four-ball match play, with only a few minor changes appearing over the last century.

The name “four-ball” refers to the fact that there were four balls in play, two for each team, with two teams competing against each other.

The other common names, “better ball” or “best ball,” refer to the fact that the better (or best) score for each team will count. However, the term “better ball” is more commonly used for matches with more than two teams competing.

Since its humble origin, four-ball golf has become a significant part of many major competitions, including the PGA Tour, the Zurich Classic, the Ryder Cup, the Presidents Cup, and the Solheim Cup.

Four-ball golf has become perhaps the most popular form of two-player golf. Its rules are old and well-established, so there are few inconsistencies or unexpected occurrences.

The Royal and Ancient Golf Club created the rules and keep them updated, and with so many major tours adopting four-ball as one way of competing, there can be no doubt that this form of two-player golf is here to stay.