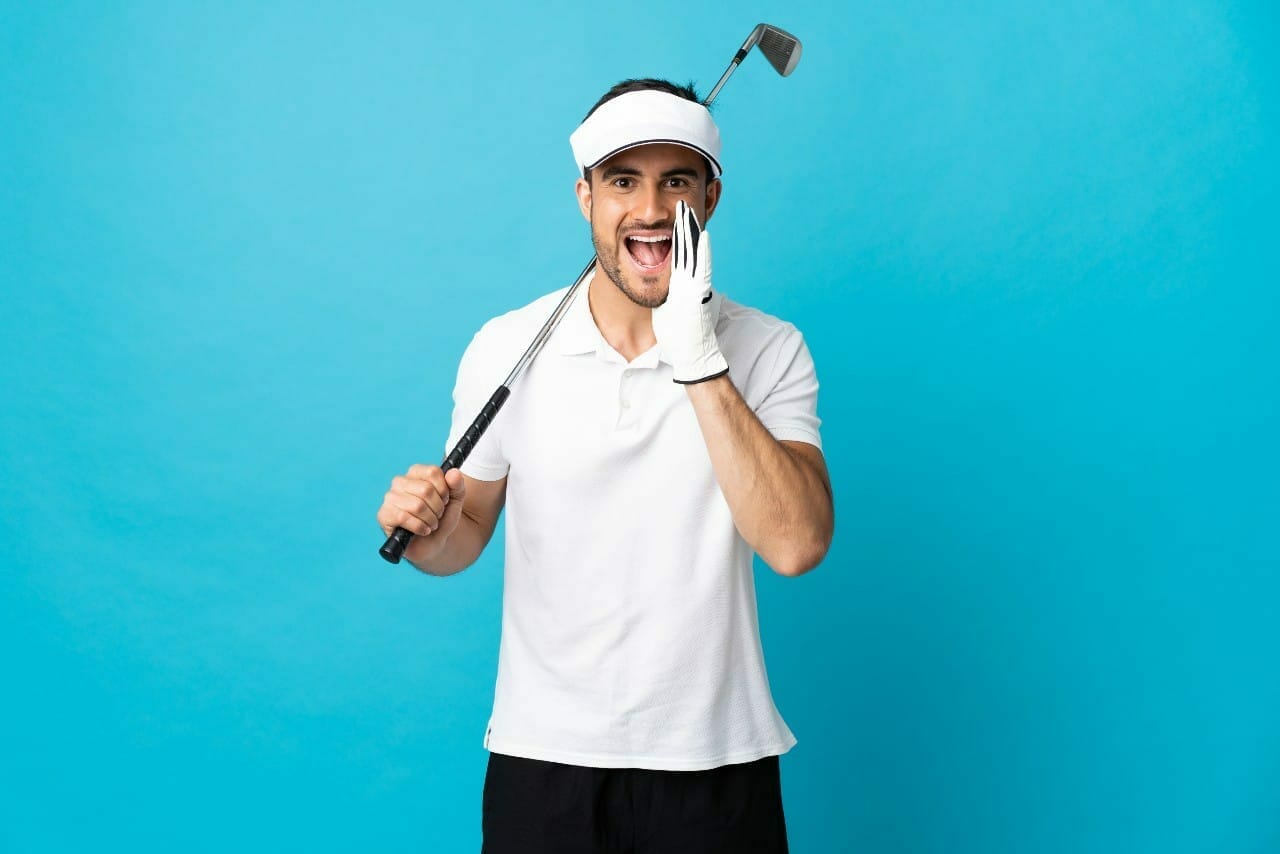 Whether you’re new to the game of golf or have been golfing for decades, you might ask yourself this prying question: why do we always say ‘fore’? What’s the meaning behind it? Well, believe it or not, the term ‘fore’ in golf has a pretty rich history that dates back to the Middle Ages…

Why do golfers yell fore? Golfers yell fore to alert other golfers that they may be in danger of getting struck by their ball. You should always yell fore if you’re unsure where your ball will land, and it is at risk of hitting a golfer. The term fore likely originated from the term forecaddie, although the exact history is unknown.

Wondering why golfers yell fore? Then you’ve ended up with the right article. Today, we’re diving deep into the world of golfing history to discover why, exactly, golfers yell ‘fore.’ Hint: there is a pretty fascinating history behind it that might surprise you.

Why Do Golfers Yell Fore on the Golf Course?

If you’re on the green and you hear a golfer yell fore, you might want to duck and hide for cover.

That’s because the golfer has just hit a shot that is so immensely bad, it’s not going to end up anywhere near the target. It is far more likely that their ball will hit someone in the head rather than end in the hole.

Typically, a golfer will also point to where the ball is going after they hit it. So, fore is yelled, followed by a point.

Sometimes, you won’t hear the fore, which makes the pointing all the more valuable. Pay attention while golfing or watching someone play golf. If they’re pointing in your direction, get out of there quickly.

When Should You Yell Fore?

Should you yell fore every time you tee off?

Not exactly; in fact, this might be a bit annoying for other golfers on the green. The only times you should yell ‘fore’ is when you’re shooting from the fairway or rough, and it appears that your ball may come close to other golfers.

Basically, if you don’t know where your ball will land, or you are afraid that it might be getting too close to other golfers, it’s best to yell fore!

And point in the direction your ball is heading. It’s always better to be safe than sorry when it comes to golfing.

What to do if Someone Yells Fore in Your Direction

If you’re playing a game of golf and someone yells fore and points in your direction, what should you do?

The last thing you want to do is look up – although it might be tempting. Balls come down from the sky at a very fast pace. You simply won’t have the time to look up and get out of the way.

The better thing to do is to crouch down and shield your head and face immediately. You want to make yourself into a tiny ball. That way, even if the ball does end up hitting you, it won’t hurt as bad.

If you can, I would also recommend trying to shield yourself behind your golf cart. Yes, you will need to move quickly. But using your golf cart as a shield can potentially protect you from a major goose egg.

The History Behind the Word ‘Fore’

Every golfer yells ‘fore’. It’s just what you do to keep everyone safe on the golf course, especially if you think your golf ball might end up hitting someone right in the head.

Why not something else, like watch out or heads up?

Today, we’re exploring all of these potential theories. From there, you can decide which one you think is “correct.”

The Term Dates Back to the Middle Ages

Think of words you may have heard or read about in Shakespeare, such as foremost or foretold.

With the term ‘fore’ relating to ‘ahead,’ it’s no wonder why ‘fore’ would be used to describe a ball that might be hurdling ahead towards your head.

One may ponder why ‘fore’ was not used with another word, though, to indicate that a ball was being thrown ahead.

It Is Derived from the Word ‘Forecaddie’

Another popular theory is that the word ‘fore’ is derived from the 1700s word ‘forecaddie,’ which was the name given to an individual that would keep track of where golf balls landed.

To let the forecaddie know when the ball was being struck, the golfers would yell out forecaddie. Eventually, the caddie part was dropped, leaving just the fore.

This theory provides the most logical explanation of where the term fore came from. It also distinguishes where the word caddie came from, although that’s a chat for another day.

It Could Have Originated in Scotland

A less popular theory is that the term ‘fore’ originated in Scotland, considering that is where golf got its start in the first place.

There was a reformer and writer living in the area in the 15th century. His name was John Knox. He told people in his town to “ware before,” essentially meaning to watch out for friendly gunfire that might be occurring behind them.

Over time, the “ware before” term may have been shortened to “fore.” The term was still used to inform people to be aware of what was going on around them.

Since ‘fore’ was used as a warning, it’s not unheard of to think that the term could also be used in a golfing setting.

Should you yell fore?

Not all the time. You should only yell fore if your ball is at risk of hitting another golfer. Point in the direction your ball is heading so other golfers know exactly where the ball is going and if they should shield themselves or not. Remember, fore is a term used for safety.

What does fore mean in Scottish?

In Scottish, fore is a word that is short for afore or before. However, in old Scottish, fore was used as a warning term. It meant “lookout ahead,” which is why many believe that the term fore in golf originated in old Scotland.

What do golfers yell?

Golfers only yell fore, although it’s easy not to know what golfers are saying if you’re just starting. While golf is typically a quieter sport, you will hear the term fore being yelled out if the golfer believes someone is at risk of being hit by their ball.

Fore is a term used regularly in golf, and it is to keep people safe. It has a fairly exciting history, although we’re not sure exactly where it came from.

When playing golf, always yell fore if you’re unsure where your ball will land, and you’re concerned it might hit someone. Point to where the ball is headed to give other golfers a fair heads up.