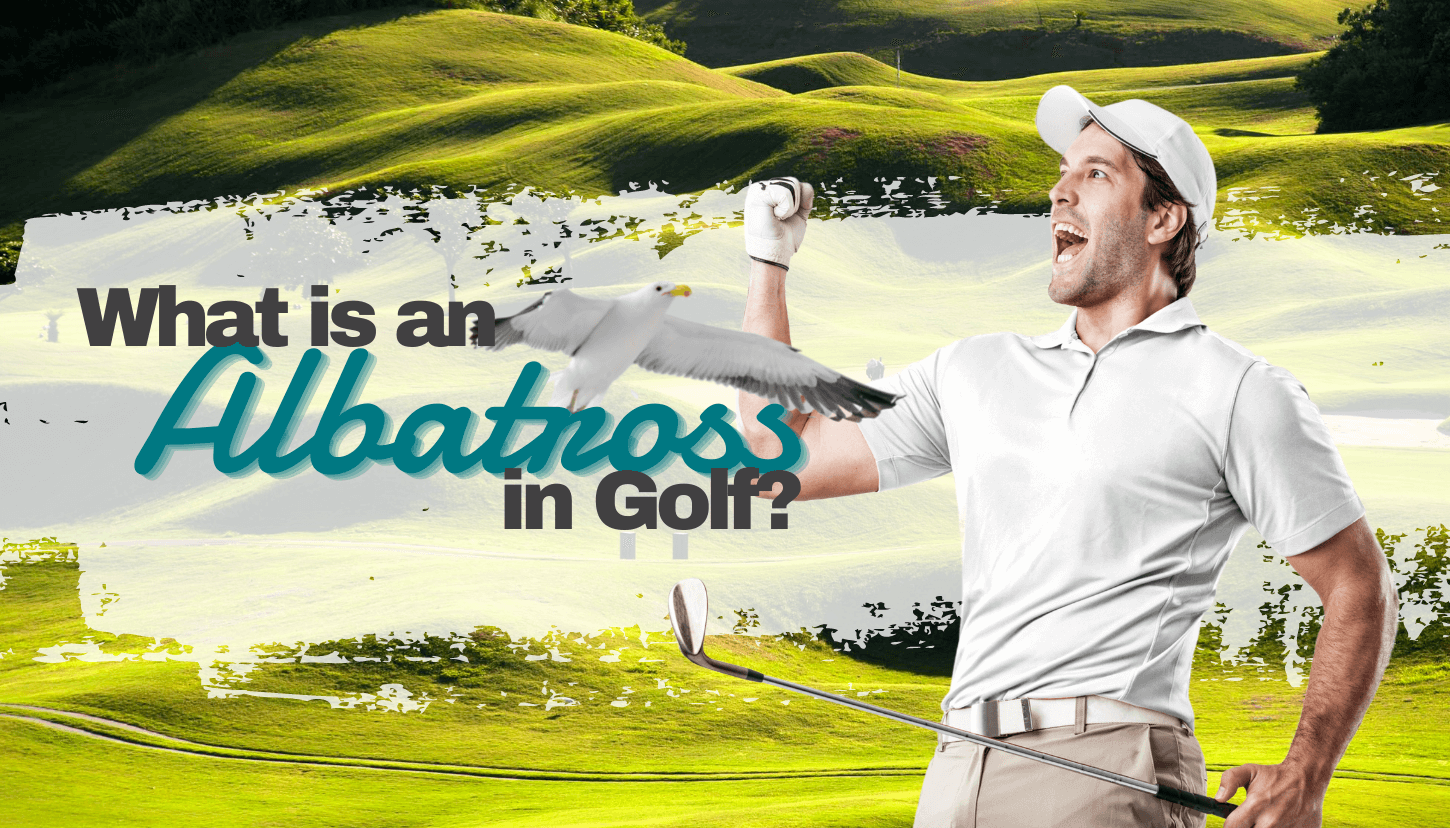 When starting with golf, you’ll notice several strange, idiosyncratic terms and rules. Some of these terms can leave you even more confused than you are. One of such oddities that you’ll see in golf is referencing birds in names of styles and scores. That’s why you’ll hear terms like eagle, birdie, and even albatross. Well, albatross in golf sounds strange, doesn’t it? You’re probably wondering what it is and why the name is. We’ll find out.

As simple as it may sound, achieving an albatross is extremely difficult. Most golfers will never have the fortune to achieve it in their playing career.

By now, you can probably guess that this feat would require a combination of luck and precision. The remaining part of this article will focus on explaining everything you should know about albatross. Read on to learn more.

A Brief Look at the Golf Albatross Origin

If you are a golf enthusiast, these strange golf terms would likely excite you. But have you ever thought of how these phrases made it to the golfing lexicon? The stories of how most of these terms originated are both interesting and amusing. This section will discuss the origin of albatross in golf.

In the 1800s, Americans used the term “bird” as slang to refer to something wonderful. Consequently, the popularity of golf in the United States in the 1980s meant that the word “birdy” soon crept into the game’s lexicon.

It soon became a trend in the American golf world to use bird themes to refer to good shots. At this time, an eagle was adopted to mean that a score is two shots under par. Of course, this scenario is not as common as the scenario referred to as a birdie. The fast spread of the trend meant that more terms were being introduced.

An albatross became a thing in golf during this time, representing a score of three strokes under par. But why albatross? Probably because this bird stands out among many birds out there.

Bird lovers know that an albatross is one of the most legendary of all birds. Based on popular belief, hurting an albatross could bring bad luck. They are among the largest flying animals, and it’s not surprising that it is used as a name for one of the best scores in golf.

How Rare is an Albatross In Golf?

As explained earlier, an albatross is one of the rarest scores in golf. It is rarer than scoring a hole-in-one. To put its difficulty level in context, only a few golf players have scored an albatross since its invention. Some of these popular scores are Nicolas Thompson, Jack Nicklaus, and Gene Sarazen.

Golf experts place the odds of scoring an albatross at 6 million to one. Compare that to the 12700 to 1 for hitting a hole-in-one, and you can tell that hitting an albatross would be a difficult journey.

Scoring an albatross is rare because it typically requires that a player sinks their second shot on a par-5. Usually, the second shot is on a par-5 measure above 200 yards from the green. Therefore, it requires an excellent level of precision and luck to sink your second shot in the hole.

Every time people discuss albatross, there’s one occurrence that always stands out. During the Fry.com Open in 2009, Nicolas Thompson scored an albatross. After scoring the albatross on the par-5 11th hole, he would go on to score a hole-in-one in the same tournament, just two holes after hitting an albatross. This feat has never happened again in the history of golf.

Factors That Can Influence Your Ability to Hit An Albatross

Yes, we’ve talked about precision when trying to hit an albatross. However, you’ll also need luck. Many factors combine to affect your ability to hole a ball from a far distance. Some of the factors that can increase or reduce your chance of hitting an albatross.

Like in everything, nature plays its part in how or when you score a shot from a far distance. Of course, nature encompasses several factors:

As always, several man-made obstacles like cart paths can give balls the extra boost they’ll need to score a hole at the expense of little scuff marks. Although they don’t occur as often as natural factors, such man-made factors can have huge impacts on different aspects of your game.

3. Ability to hit the ball far

An Albatross typically involves scoring a hole that’s a long way away, and of course, you’ll need all the factors we’ve listed above. However, more than anything, you’ll need to learn how to hit the ball far.

Of course, it takes practice and a lot of mental strength to hit the ball far regularly and consistently.

Tips For Scoring an Albatross

So far, we’ve explained how difficult it is to score an albatross. Even the best golf players still find scoring an albatross to be incredibly difficult. Yes, it’s so much about skills, but you’ll also need a bit of luck.

Even still, golf players still adopt a few skills and tricks to improve their chances of scoring an albatross. Here, take a look at some of these tricks.

The first place to start if you are looking to achieve an albatross is your ball control. You don’t have any hope of scoring an albatross if you have weak control of the golf ball. Adequate control includes knowing how to access distance, terrain, and wind direction.

Therefore, if you fancy scoring an albatross, perhaps you should start by working to improve your control.

As a golf professional, you’ll find yourself playing in certain country clubs and other venues several times. This typically means that you’ll get more familiar with certain courses. Repeatedly playing on one course improves your chances of scoring an albatross because you know the tricks to achieve certain shots.

If you have a favorite golf venue, study the holes and give yourself more time to practice.

Use the right club

One of the criteria that qualifies you as a golf pro is your knowledge of the golf clubs. Pros know the right clubs for different shots. If you do a little more study, you’ll find that most albatrosses have been scored with irons of various sizes.

The reason for this is not farfetched. It’s likely because of how great irons are for middle-ground shots, which are often adopted to score a double eagle on a par-five course.

Stay on the fairway

Yes, we just said that. Of class, it’s not impossible to score a two-shot albatross from a bunker or sand trap, but it’s typically more difficult. The sand in the bunkers would apply too much friction, therefore, reducing the distance of your strokes. The same applies to rough-on courses.

Therefore, we typically advise golfers to stay on the fairway since it improves their chances of scoring well under par.

This one is a no-brainer, but perhaps we need to reemphasize it. The weather condition plays a vital role in your ability to hit an albatross.

Therefore, we suggest that you pick sunny, low-wind days for practice. Yes, the weather can sometimes be unpredictable, but since it takes so much luck to hit an albatross, you’ll want to do everything possible to minimize other factors that could get in the way.

Lastly, but most importantly, keep trying. When you begin, it’ll seem like an impossible feat, but as the days go by, you’ll see yourself coming closer to it.

Therefore, it’s essential to be patient with yourself and remember that it’s not easy for even the best golfers. The more practice you put in, the closer you’ll get to scoring an albatross. Regular practice makes your swinging muscles stronger, so you’ll be able to send the golf ball flying farther with every shot.

Conclusion: What is a Golf Albatross?

That’s it, a detailed look at what an albatross in golf is. An albatross represents a golf scoring term for three strokes shots under par on a single hole. It is a tremendous achievement in golf.

Unfortunately, not many golfers will ever have the fortune of achieving it because of its difficulty level.

So far, we’ve seen that it involves a good blend of expertise and luck. But there are some practices that golfers try to give themselves a chance of achieving it. We’ve highlighted some of these practices in this article. Remember, it’s not too late to try!