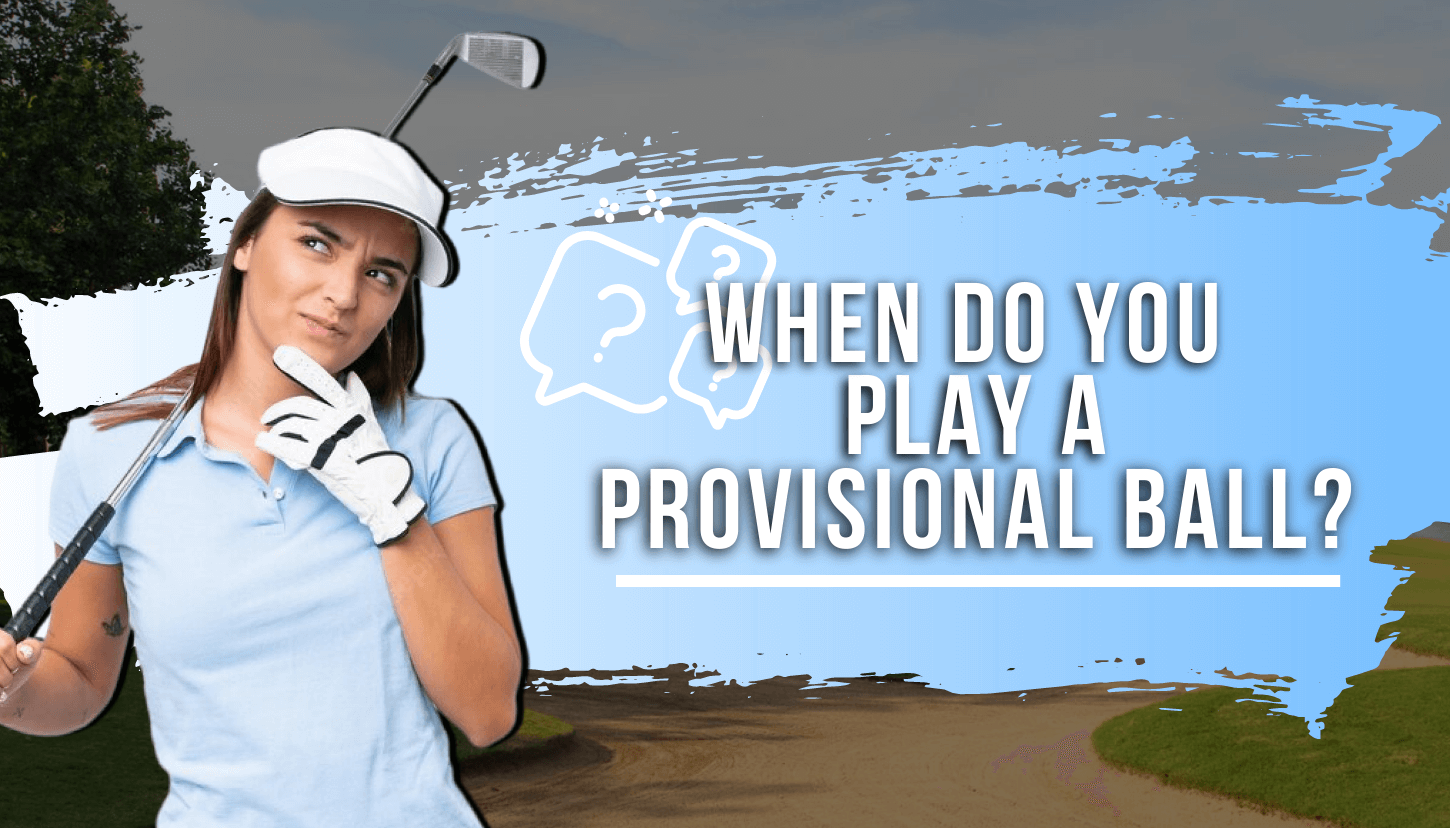 While some rules in golf may work against players, one direction can work for a player, and this is the rule concerning the provisional ball. Using this rule properly in a round can save you strokes, but what is a provisional ball in golf?

A provisional ball is played when the ball in play may have either gone out of bounds or been deemed lost outside a penalty area. The provisional ball is subject to penalty under stroke and distance, and it has to be announced to the playing group or competitor before it is played.

Like many rules in golf, there are considerations when playing a provisional ball that need to be understood, so let’s tee it up and explore this option and the rules that govern it in a little more detail.

When Do You Play A Provisional Ball?

The easiest example is where you have played a tee shot and sliced or hooked it badly, and it is most likely to have gone OB or has disappeared into the jungle and is unlikely to be found.

Remember that under the laws of golf, you have three minutes to look for a ball before declaring it lost, but if you suspect it is lost, you can then opt to play a provisional ball.

You can also play a provisional ball from the tee or fairway or wherever the ball in play was hit from and then was hit OB or could be deemed lost.

You Have To Declare Your Provisional Ball

This aspect of the provisional ball is not something every player knows, and not adhering to this rule will cost you further penalties.

If you determine that the ball in play is possibly lost or has gone OB, you must announce or declare to your playing group or opponent that you intend to play a provisional ball.

You must also declare and hit the provisional ball before you or any of your playing party goes forward to look for the original ball.

If a player fails to declare a provisional ball and plays a second ball, that ball becomes the ball in play, the first ball is deemed lost even if it is subsequently found, and the penalty of stroke and distance would then apply.

What Happens When You Find Your First Ball?

Here again, it pays to know the rules of the game. If you tee off and slice/hook that shot and suspect it may be lost or OB, you can declare a provisional ball.

However, should you then proceed to find the first ball and it is in play or a penalty area, you must play that ball as it lies and under penalty; if such a penalty exists, you can then pick up your provisional ball without penalty.

For example, you are playing over water and suspect your ball has gone into the water. You may not play a provisional ball here, as you know your ball may be in the hazard.

You would have to play that next shot from the nearest relief point and at the closest point to where your ball entered the hazard as defined by the game’s rules and apply the relevant penalty.

The 3-Minute Rule For A Missing Ball

No law says you must look for the first ball if you have deemed it lost. The current rule defines a lost ball as lost if it is not found after three minutes of searching by the player or caddie.

Most golfers would consider it poor etiquette if players went looking for a ball after it was declared lost, but if that ball is found, it has to be played from where it lies, and a penalty of stroke and distance applied if required.

When A Provisional Ball Cannot Be Played

The provisional ball rule deals with the uncertainty of the fate of the first ball only. If you have hit the ball toward a hazard and are reasonably sure that the ball is in the hazard, whether that hazard is water or sand, you may not play a provisional ball.

If you find the ball in the hazard or confirm it has gone into the water,  you can either play it as it lies or take a relief option.

What Stroke Penalty Is A Provisional Ball?

A provisional ball is only a single-stroke penalty and would be the same as the ‘lost ball’ penalty in play.

While you only incur a single-stroke penalty for a provisional, you must abide by the rules of the provisional ball to avoid further penalties, especially when playing in competition.

If you play a second ball after hitting the original and do not declare it as a provisional, you will be subject to an additional penalty under the game’s rules.

So, if you hit your original out of bounds or possibly into a hazard and then proceed to play a second ball without declaring it a provisional, you would incur a penalty stroke.

If you hit the second ball into a hazard or out of bounds, that would incur a second penalty stroke, as you didn’t declare it as a provisional.

The difference here is that had you declared the second ball as a provisional and played it; there would only be a single shot penalty incurred should you reach the point where the original was deemed to have landed, proceeded to search for it, and then subsequently declared it lost.

What Is The Purpose Of The Provisional Ball In Golf?

This is not a ‘mulligan’ or do-over, but a rule designed to save time and speed up play by allowing a player to hit a second provisional shot under a single shot penalty.

In the past, and especially with very high-handicap golfers, the pace of play on the field was slowed tremendously by players constantly looking for balls, and so to reduce the backup in the field, the R&A reduced the search time limit to three minutes.

Using the provisional ball rule allows players to hit a second ball without first having to walk up and look for the ball and then walk back to play a second if the original could not be found.

The provisional ball in golf is an effective and fair rule that allows players to maintain the pace of play while still retaining the option to look for and play their original ball within the time frame stipulated under the rules while only incurring a single stroke penalty.