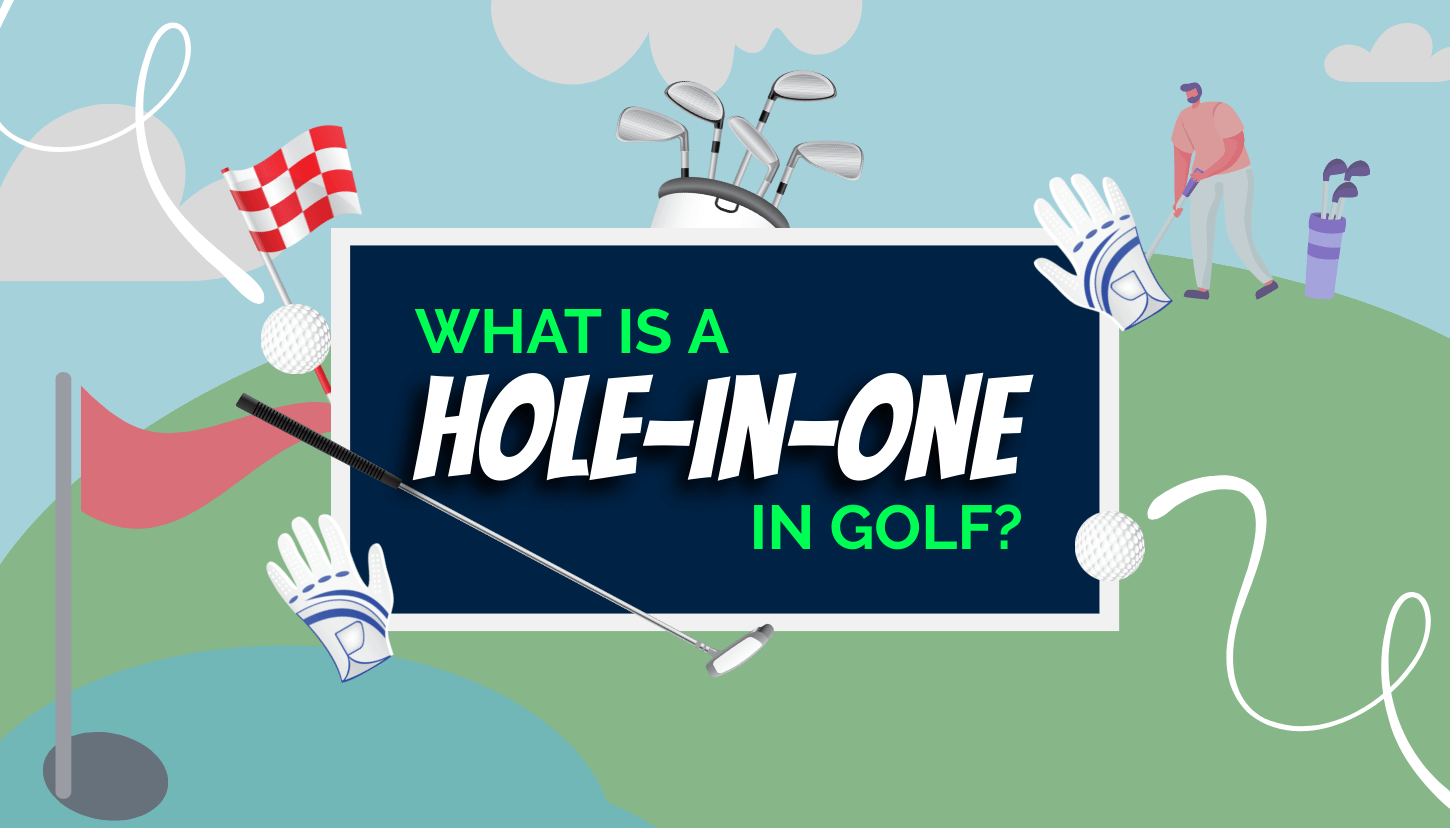 Whether you’re a pro golfer or just a fan who goes to the course once in a while, you’ll want to know different golf terms and what they mean. One of the golf terms that are quite confusing to many golfers is hole-in-one. You’ve probably heard people talk about a hole-in-one in golf or seen it in a golf article.

What is a hole-in-one in golf? Also known as an ace, a hole-in-one occurs when a golfer gets his golf ball into the cup on the green with a single stroke. This means hitting the ball directly into the hole from the teeing ground.

Yes, a hole-in-one is one of the most exciting things that can happen to any golfer during a golf round. It’s important to note that the most probable distance from where a hole-in-one can occur is the par 3 holes, which is the shortest distance hole on a standard-size golf course.

However, there have been quite some cases where longer hitters have accomplished this feat on longer holes, although many people believe the par 4 and par 5 holes to be too long for golfers to reach with a single shot.

A hole-in-one shot is popular in and outside golf and would require significant power, precision, and a bit of luck to complete. However, despite these factors, a hole-in-one is considered more common and less impressive than several other hole achievements like an albatross (completing a par 5 in two shots).

Here, we’ll try to explain what a hole-in-one is, how significant it is in golf, and how professional and amateur golfers can hit it. Let’s go!

How Difficult Is It to Make a Hole-in-one?

The simple answer to the above question is “very hard”!

Yes, you heard that right. Sinking your golf ball into the cup with one stroke is as hard as it sounds. But yes, your chances of hitting a hole-in-one would definitely increase as you become better at golf. It also improves as you move to shorter holes. After all, the first step to making a hole-in-one is reaching the green with your tee shot. So, irrespective of where you’re playing from, as long as you can achieve this, you’ve hit an ace shot.

As explained above, it’ll always be easier to hit an ace shot from a par-3 hole than it would be from a par-4 or par-5 hole.

Holes-in-one may not be so common in golf, but they happen. And the truth is that different golfers of different levels would probably make an ace shot. Luck plays a significant role, and that’s why there are stories of golfers making holes-in-one right after mastering the art of club swinging.

According to statistics, the chances of making a hole-in-one are more during practice or recreational rounds because of how relaxed you are. But it still happens in tournament rounds and events designed specifically to give golfers a chance to hit an ace. We are saying that there are no set rules to making an ace, although there are some times that can help you improve your chances (more on that later).

What Are The Odds That Your Event Will Have a Hole-in-one Winner?

Hitting a golf ball into a hole with one shot from over 150 yards may seem like an impossible task, but it happens all the time. But what are the odds that this would happen in your event? Unfortunately, so many of the quoted odds you’ll see on the internet for an amateur making an ace are wildly off.

For example, we’ve seen so many odds, including 100,000 to 1, which is a blatant lie. Luckily, a few reliable websites have correctly predicted the odd, so you’ll still find the correct thing if you look carefully.

Without wasting any more time; the odds of making an ace for you as an amateur on a par-3 hole are around 12,500 to 1. The odds become more in your favor as you progress in your game. It can even get to 2,500 to 1 for professional golfers in the same playing circumstances.

You’ve also probably heard stories of events where two golfers made the same hole-in-one. That’s a possibility, but the chances are very slim: about 32,000 to 1.

A new car. Your first home. The birth of your first child. There are often so many ‘firsts’ that we aspire to achieve in life. For golfers, a hole-in-one is such a great feat that doesn’t always happen. If you’re wondering how you can make your first hole-in-one, you’re not alone. Most golfers all around the world dream of hitting a hole-in-one.

However, the problem is that it sometimes boils down to luck. But don’t be dismayed; you can still make a hole-in-one if you do a few things correctly. Here are tips that can take you closer to the possibility of making a hole-in-one in golf.

You’ve probably read stories where players talk about how they just feel it. It’s the confidence and optimism that come with consistently playing the game. Whether you’re a newbie or a pro, you need to have the confidence that you can make a hole-in-one. Yes, confidence is not everything, but it’s a good place to start your journey. This is where experience comes into play. We know that most novice golfers often get intimidated by how tricky some holes are.

On the other hand, professionals have mastered the act of shifting their focus to where they want their ball to land. Instead of focusing on your fears, think about the areas you’d like to pinpoint your ball, and don’t worry about any obstacles like sandpits, trees, and water.

2. Square up your hole

Confidence will prepare your mind for what’s to come, but you’ll also need to put in the work to achieve such a difficult feat. In fact, the main work begins when you’re ready to take your swing.

Square yourself to the hole. This position automatically pushes your left shoulder to face the hole, while your left foot would be directly underneath your left shoulder. This is the foundation, and it is key to how your shot would approach the target.

It’s almost impossible to make a hole-in-one with a low shot. So the tip that most pros will give you is to avoid hitting a low shot and bouncing it toward the green. Instead, focus on trying to hit a high and on course. As your club returns to your shoulder height, come through the ball with speed and velocity.

The truth is that full and aggressive swings are known to increase golfers’ chances of making an ace.

Nothing trumps practice when you’re trying to learn something new in any sport. Yes, luck is an important factor in hitting a hole-in-one, but so is your expertise.

If you really want to improve your chances of making an ace, you won’t take moments on the driving range lightly. Leverage these moments to get a grasp of what it feels like working with both long and medium irons. Long and medium irons are typically not as forgiving as short irons, but if you can learn how to square your hips and give it a hard swing, you’ll be one step closer to achieving a hole-in-one.

Recap: What is a Golf Hole-in-One?

There you have it, a detailed look at what a hole-in-one is in golf. A hole-in-one is a significant achievement in itself. Everyone had heard about it—even those not in golf. However, not everyone understands what it truly is.

Well, maybe the pros know it and even aspire to make it, but how about the amateurs and passive lovers of golf? Everyone deserves to truly understand this fascinating concept in golf. That’s why we’ve done the heavy lifting for you. This article contains everything you’ll need to know about a hole-in-one, including tips to help improve your chances.

Remember that you’ll also need a bit of luck, so if after so much effort, you still can’t make a hole-in-one, it shouldn’t be a reason to sulk up. Just keep going. One day, you’ll be lucky too.