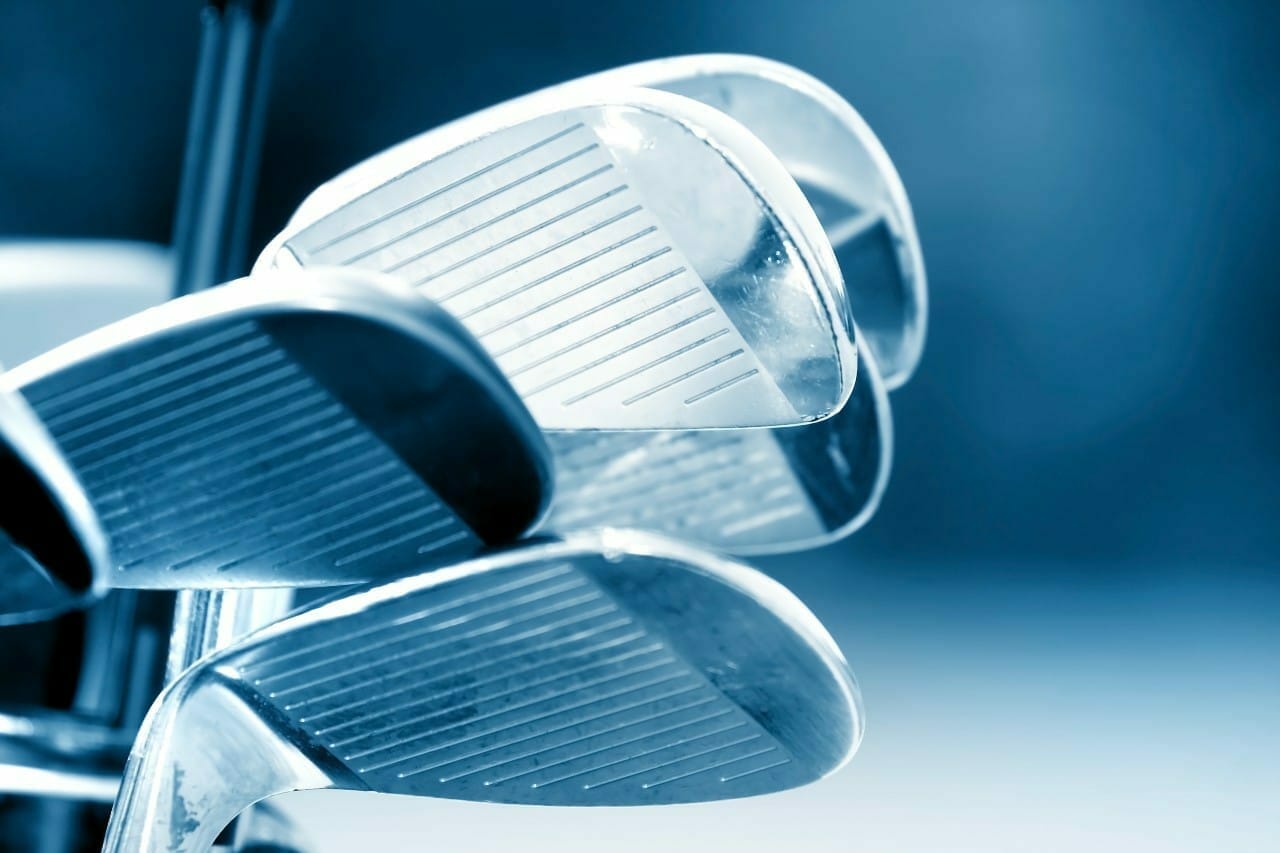 Whether you are a casual golfer or a scratch player, you are probably familiar with the many different types of golf clubs in the marketplace, including woods, irons, putters, hybrids, and wedges, among others. Most of us only use one or two irons in our sets, but how many irons in a golf set and when do you use each?

So, how many irons are in a golf set? These 7 irons are included in modern golf club sets:

Stick around because we tell you how irons have changed over the years (golf sets used to have 2 irons), physical differences between each iron, and how to choose the best iron for every shot.

What are Golf Irons?

Before we dive into what each iron does, it’s essential to know what an iron is in the first place. Irons are called “irons” because of their metal club-head. They are thin from the front to the back and they are grooved along the edge in order to create a spin on the golf ball.

There are typically 6 irons in each set, ranging from 3-9. There used to be 2 irons included in an average golf set as well; however, they have become exceptionally rare in recent days.

It’s important to note that many people think the 3 iron is unnecessary. The reason for this is because there is a club called the 3 hybrid that is known to get the ball even further. Hybrids are also known to give your shot a bit more height and forgiveness, which definitely comes in handy in many different shots.

What Does Each Iron Do?

The irons are numbered 3-9.

Short irons are the 8 and 9 irons.

As you go through the irons each one has a bit more loft than the one before it and a little bit of a shorter shaft. This means that each club following the 3rd iron hits the ball with a little less distance than the previous club.

The difference in distance typically comes down to about 10-15 yards. Essentially your 3 iron should produce a shot that is 10-15 yards longer than your 4 iron. As you move through the irons, the shorter the distance the higher the trajectory of the shots.

This also means that balls hit by the later irons, such as the 8 or the 9 will roll less  than balls hit by irons 3 or 4 once they’ve landed. They call these landings “soft” landings because they are not going to roll, they will just land softly and pretty much stay put.

Length of Irons and their Uses

For most beginners, the shorter irons (8 and 9) are going to be easier to hit than the mid irons and long irons.

The reason for this is as the loft increases and the shaft length decreases, the club is easier to control.

Oftentimes this is compared to “choking up” on the bat in baseball. This technique is not necessarily going to have you hitting balls out of the park, but it will allow you to be more confident in your abilities to at least make contact with the ball. This control is due to the added loft that these irons provide, which helps the ball get airborne easier.

It’s important to understand that each iron is not going to guarantee a certain distance the golf ball will go. The different irons will greatly affect how far you, personally, are able to hit the golf ball, but no two golfers are the same. For example the typical male golfer may be able to use a 4 or 5 iron from 160 yards, but a female might need to use a 3 iron.

They decrease about 10 yards the higher the iron number consecutively. This is very important to keep in mind when selecting which iron you’ll use for each shot.

Where to Use Each Iron

Irons can be used on either the teeing ground or the fairway. When you are hitting the golf ball off of a tee the iron will give you better control of your shot. But, irons were really designed with the fairway in mind. They have a leading edge that is rounded sharply and this edge gives you the ability to take a shot from a spot that may have divots or be in a unique terrain.

Conclusion: How Many Irons in a Golf Set?

Ultimately, there are 7 irons in a golf set, and while you may think that is redundant, there is a purpose for each one. Now new golfers, go take this information and wow your friends when you know exactly, which iron to use for each shot!