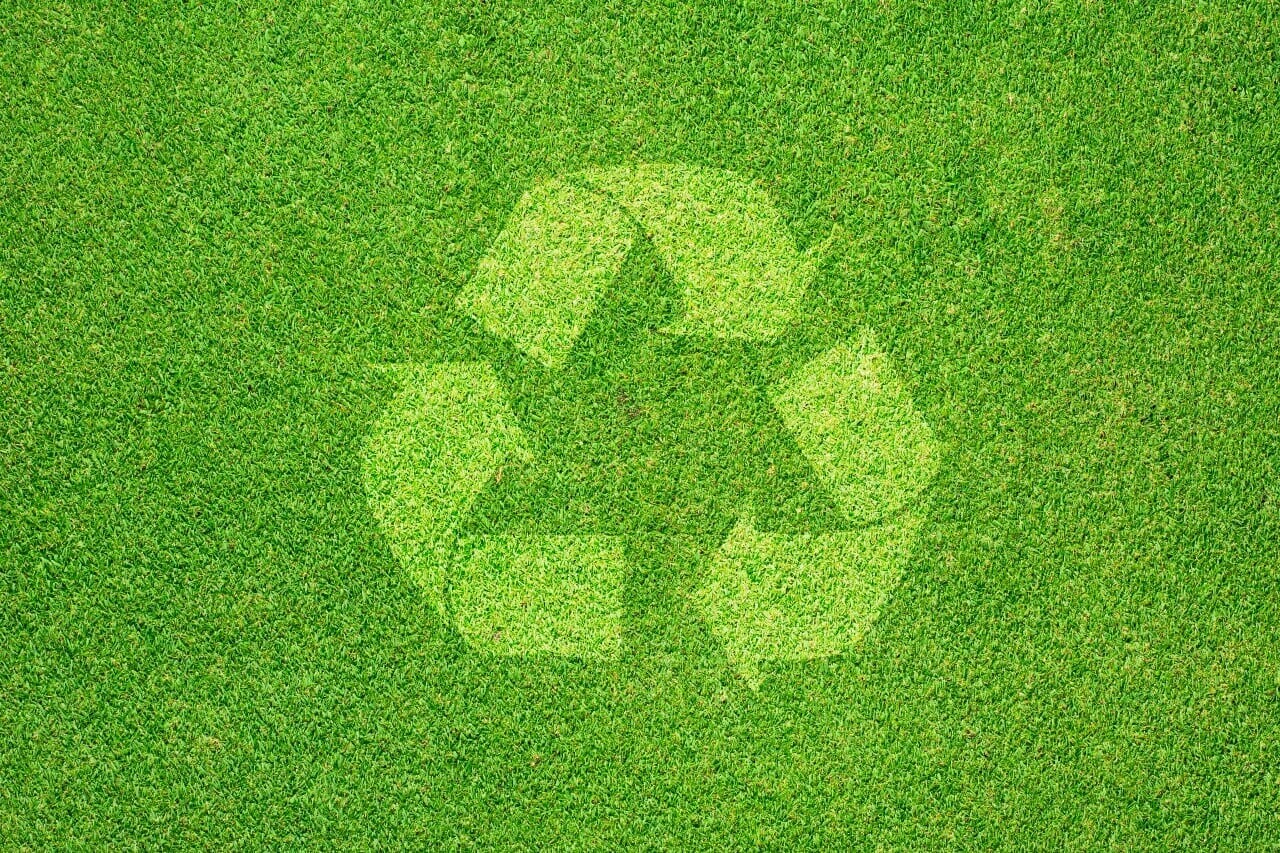 Manufacturers sell more than one billion golf balls per year! …but can golf balls be recycled? Golf balls are the only piece of equipment you use on every shot of every round of golf you play. They have cores with materials that don’t deteriorate as quickly as their covers and many golfers trash their ball after its cover becomes scuffed or cut.

Helping the environment is a worthy goal built on the three principles of reduce, reuse and recycle. Even though golf balls are not recyclable, we golfers can be environmentally friendly by reducing the number of balls we use and reusing them when possible.

Why are Golf Balls so Hard to Recycle?

Two-piece construction distance golf balls with durable Surlyn covers started being used in the 1960s, according to Titleist. Since 2005, every player on the PGA Tour has played a multi-layer solid core golf ball.

An example of that is Titleist’s Pro V1 golf ball, which they introduced in October 2000. The Pro V1 is made with a urethane cover surrounding a solid core.

According to a Titleist executive, polybutadiene, a synthetic rubber, is the Pro V1 core’s essential element because it produces a “high-energy return.”

Japanese golf ball maker Kasco has been using polymer producer Lanxess’s neodymium polybutadiene rubber in the core of its balls.

Golf ball covers and cores are made from different materials that are joined together with an adhesive. Adhesives ensure the core and cover remain in fixed relationship to one another.

Together, those issues make it expensive to recycle ball materials, which reduces the economic feasibility of recycling.

Golf Ball Recycling Was So Close, Though…

Nike filed a patent application for a recyclable golf ball in 2012, which was approved two years later. The Beaverton, Oregon company’s design used an extra separator layer between the cover and the core.

Nike said the recycling process would involve “the use of a chemical reaction that creates a gas enabling the skin to be slipped off,” in their patent application.

Former Nike Golf president Cindy Davis announced her retirement soon after the patent was approved. Nike narrowed their focus to apparel in 2016, and stopped selling golf clubs and golf balls.

Now, if you Google Nike recyclable golf balls, the results say recycled but they really mean reused. Not the same thing.

A Canadian company sells golf balls it bills as better for the environment because they claim their balls dissolve in water.

They also claim their product isn’t coated with the Zinc Oxide, Zinc Acrylate, and Benzoyl Peroxide used by most golf ball makers. The company notes those chemical coatings wear off  in saltwater, damaging marine life and leeching into the water supply.

Many people believe wood golf balls were used until the feathery ball was invented in the seventeenth century, but it’s very likely early golfers used hair balls. Although wood balls lasted longer, the furthest they could travel was around 250 feet so it’s unlikely links golfers used them in regular games.

The Romans made a small, leather stitched handball filled with hair, called the harpastum. There’s no evidence they were ever used for golf or any other stick-and-ball game.  But the Romans occupied Britain for hundreds of years and many of their customs and habits, like bathing, were adopted by the British.

The hairy ball was probably one of the balls imported between 1486-1618 from The Netherlands, where it was manufactured in large quantities. The hairy was often used for the version of golf played on ice, because it could be hit more than 400 feet, and could be controlled better than wooden balls.

Early golfers began stitching together leather sacks filled with feathers and painted, in hopes of making something better than a wooden ball. The painted balls were pretty expensive and easily damaged.

A new type of feathery golf ball was created around 1618 by using cowhide stuffed with goose feathers. The process began with wet leather and feathers. As the leather shrunk during drying, the feathers expanded to make a hard, compact ball. The new feathery could sell for more than the price of a golf club.
The golfers who could afford to paid the high price for featherys because the ball had much better flight characteristics than a wooden ball, which spelled the end for wooden balls. Feathery balls were standard for almost 300 years before being replaced with the Gutta Percha ball.

The Rev. Dr. Robert Adams began creating golf balls out of Gutta Percha, in 1848, from the dried sap of Sapodilla trees. It was formed into ball shapes by heating it up and shaping it while hot. The “gutty” revolutionized the game because of the consistency it added to play but it only lasted period lasted until the late 1890’s. Rubber Core Golf Balls

Design testing has been done with many different types of cores. At one point, even, a small sac of water was substituted for rubber cores. Steal, lead and glycerin have also been tried until most golf ball manufacturers settled on one form of rubber, or another.

Today, two-piece solid Syrlin-covered balls are used by many amateur golfers because they carry longer and fly straighter. Pros, though, often use Balata balls, since they can get the distance needed and prefer the added spin for control. Balata is a form of natural rubber obtained from a South American tree.

Can Golf Balls be Recycled Conclusion: Reuse Your Golf Balls!

Recycling won’t be economical for golf balls anytime soon so reusing golf balls looks like the best way for golfers to help the environment. I remember searching for lost golf balls in the woods and water hazards on the nearby golf course so I could sell them. No doubt, that tradition continues and you can buy found balls for a fraction of what you would pay for them new.

Many golf courses sell used balls at discounted prices and others mix them into buckets rented for the driving range.

And, a number of companies make it their business to sell re-conditioned used golf balls. Foungolfball.com is one of the better known names in that space .