The Ping G25 Driver is the next products in the GX line-up. The previous G drivers have been amazing, so it is going to be hard for the G25 to improve in many areas - or so we thought.

However Ping have made some subtle changes, which add up to a whole level of greatness.

Below you will find the Rotary Swing review (super in-depth), followed by a less in-depth review (if you are in a hurry).

If you are considering purchasing this golf club, we have also included a list of pros and cons, and our standard rating table 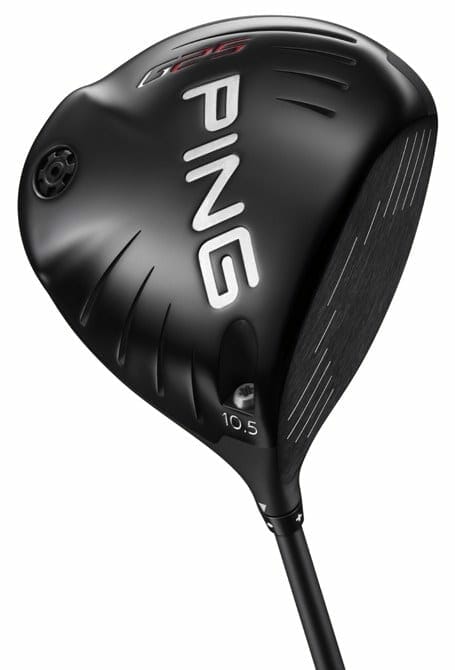 The G25 Driver is perfect for both beginners and pros.

When you purchase a Ping you are buying into a long history of quality clubs - so you can be sure of its high quality.

We're at the PGA Show 2013, and it's great to see Marty Jertsen here again from Ping. He's involved in product design, we come back to you every year Marty and it's great to see you. Thanks very much. You're looking well. I'm doing good. New shades? Yeah you know… nice ones. The Ping G25 driver, how can you keep improving on what's probably some of the bestselling drivers out there. Well that's the thing. We always get asked if we leave anything on the table when we come out with a new product and I can guarantee everyone out there that we're not leaving anything on the table. We've had our biggest improvement in both CG position, both down and back away from the face, and inertia of any G series driver, from G20 to G25. Now to the layman, CG position and inertia, what do they mean? Good question. CG position means… that controls the spin and how high you launch the ball. So it's an extremely high launch driver but still has low spin characteristics to it. Inertia, what does that mean? The club is more forgiving. When you miss hit it it's going to perform more like a centre hit and we've had drastic improvement in both those things. Ok and just an overview on loft adjustability on this. What we've done is we've kept our adjustable loft technology tuning system very simple. You don't need a user’s manual. We still have 4 static lofts, 8.5, 9.5, 10.5 and 12, and then to fine tune your trajectory after you get your driver you can either add a half a degree, put it on the plus. Or subtract a half a degree, put it on the minus. Very simple. Not confusing, won't mess with your confidence. And the face of this driver, the G25, is very big looking at address. Yes, it's really big. SO when you set it down we've elongated it from front to back substantially. That's helped drive up some of our inertia. It's still within the 460ccs of conformance but we've better utalise that volume. And is it heavier to lighter than the other incarnations. Well without high balance point technology we're able to make the head, compared to the average shaft out there, with the shaft we're using in the G25 adds about 7 grams additional mass. So we've made the head one gram heavier than the G20. That gives more momentum at impact. It's not just the energy that we care about which is 1/2 MV2, we care about mass times velocity, that momentum. This is a high momentum driver. So to take all the mathematics down, how far can people expect to hit this a little bit further than the previous model. Absolutely, so you can play not as much loft so you get more ball velocity on not playing as much loft. And in our test we've seen that over the G20, improvements of 5-10 yards. And a lot of that improvement from better launch conditions, more ball velocity but a lot of it's because nobody hits their driver perfect every time, even Bubba Watson and Hunter Mahan, who have just switched to it, have picked up yardage with the G25. Fantastic, thanks Marty. That's the G25 from Ping new for 2013.

The G25 certainly lives up to its high heritage, with Ping making another best seller.

It is perfect for both beginners and pros, and you know that you are buying a product which has gone through rigorous testing.

While it isn't the most exciting club to play with, you can be assures a consistent shot, which will be key for improving your game this summer.

If the Ping doesn't sound quite right, then check out our Best Golf Drivers For Mid Handicappers.

Click here to see reviews and prices for the Ping G25 on Amazon.com

No results have been returned for your Query. Please edit the query for content to display.

Honest Golfers is a participant in the Amazon Services LLC Associates Program, an affiliate advertising program designed to provide a means for sites to earn advertising fees by advertising and linking to Amazon.com.
*Amazon and the Amazon logo are trademarks of Amazon.com, Inc., or its affiliates. As an Amazon Associate I earn from qualifying purchases.